AASHTO Policy Letters Focus on the Needs of Autonomous Vehicles 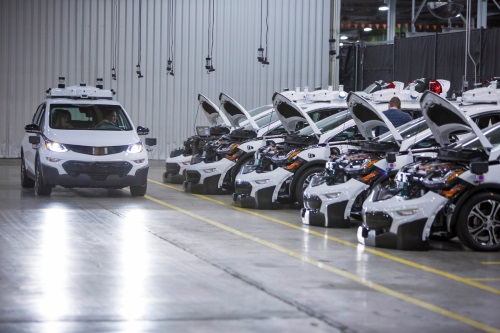 Motor vehicle safety standards, communication technology, and regulations governing the operation autonomous vehicles were among the key policy issues the American Association of State Highway and Transportation Officials addressed in three letters sent to the National Highway Traffic Safety Administration, Federal Communications Commission, and the USDOT’s Office of the Secretary, respectively, on Nov. 26.

[Above photo by General Motors.]

AASHTO’s letter to NHTSA concerns the agency’s Oct. 10 advanced notice of proposed rulemaking that aims to create a national pilot program for testing autonomous technologies; allowing the agency to issue exemptions from Federal Motor Vehicle Safety Standards for self-driving light-duty motor vehicles that “do not have traditional designs.”

[Side note: A survey conducted by AAA in May this year shows that driver fears of autonomous vehicles appear to be easing. AAA also found that a majority of U.S. drivers report high confidence in their own driving abilities—despite the fact that more than 90 percent of motor vehicle crashes are the result of human error.]

AASHTO’s letter to the FCC concerns that agency’s effort to open up the 5.850 to 5.925 GHz dedicated short-range communications or DSRC band to broader usage by “unlicensed” devices.

“While [FCC’s] Phase I tests may have shown that unlicensed devices do not interfere with DSRC communications, it is important to qualify that these tests were performed in a controlled environment and the results do not always translate to the real world,” AASHTO noted. “State and local transportation agencies have invested millions of dollars in DSRC, and they do not want the investment in this life- saving technology to be wasted. Therefore, there is an obligation on the part of the commission to ensure that the effectiveness of the spectrum dedicated for transportation safety and mobility applications is not compromised.”

[Side note: In June, Bill Panos, director of the Wyoming DOT, explained to members of the Senate Committee on Environment and Public Works why connected and autonomous vehicles will bring both opportunities and challenges to state DOTs.]

The group added that DSRC is also currently a crucial component in the safe operation of autonomous vehicles; a communication channel allowing self-driving vehicles to communicate with one another and the infrastructure around them, such as traffic signals.

“AASHTO’s current position is that DSRC, which operates in the 5.9 GHz spectrum, is the only viable technology available to support [autonomous] vehicle applications at this time,” the group said. “Its use to enhance safety, and ultimately reduce crashes and fatalities, is critical. However, AASHTO does recognize that future technologies may become available … that are similar or better than DSRC and the industry must flexible to adopt these technologies as appropriate.”

Finally, AASHTO’s letter to USDOT provides feedback on the agency’s third guidance update for autonomous vehicles issued on Oct. 4. Officially entitled Preparing for the Future of Transportation: Automated Vehicles 3.0 or AV 3.0 for short, it builds upon but does not replace the voluntary guidance USDOT provided in its Automated Driving Systems 2.0: A Vision for Safety issued on Sept. 12 last year.

“We agree with USDOT’s statement in AV 3.0 that the first principle, and highest priority, must be the safety of all roadway users: vehicle operators and occupants, pedestrians, bicyclists, motorcyclists, and other travelers,” the group said in its letter. “The safety of all users of the transportation system is the most important consideration for AASHTO and state DOTs with respect to transportation infrastructure and the emerging deployment of connected and automated vehicles or CAVs.”

AASHTO noted that “the advent of AVs is blurring the role of the vehicle and the operator subject to traditional jurisdictional lines and requires a new collaborative approach to what lies ahead. Just as states have worked hard to assure reciprocity of drivers’ licenses through alignment and uniformity of education and testing requirements, they will do the same when it comes to uniformity nationwide for AVs and working with the federal government to ensure a common understanding of AV behavior and expectations of the infrastructure.”

The group noted that another challenge is that “as the technology advances faster than the ability of state regulatory agencies or legislatures to respond, obsolete laws and regulations may hinder technological advancements or encourage companies to operate

in states that offer favorable regulatory environments. Thus, a patchwork system for the operation of AVs could slow nationwide deployment, leading to the uneven accrual of benefits across the states.”

Another major issue confronting state DOTs where CAVs are concerned is how to pay for infrastructure upgrades those vehicles will require.

“States are struggling to find the fiscal resources to maintain their current infrastructure, and the need to retrofit roads, bridges and other assets to accommodate CAVs presents an undue financial burden to state DOTs,” AASHTO stressed. “CAV benefits will not accrue unless states can afford to make the necessary investments to accommodate them.”