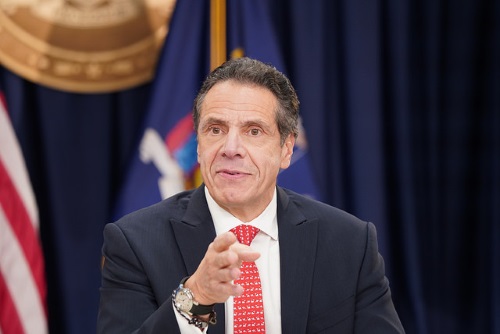 A Nov. 28 meeting between President Trump and New York Gov. Andrew Cuomo (D) (seen above) produced positive headway on a number of infrastructure-related efforts, including the stalled Gateway Project, though the price tags for such efforts remained the main stumbling block in their conversation.

“The next steps would include working with the federal government, primarily the Port Authority working with the [USDOT], to find out how we could get to the bidding process and give bidders the security to know that this is a project … worth their time and investment to come up with bids so we have certainty to what the ultimate financial exposure is,” he said.

Gov. Cuomo said the meeting came about in part due to an October video (see below) he sent to the president highlighting the deteriorating condition of the Hudson River railroad tunnels.

While he discussed other infrastructure projects with President Trump – the redesign of LaGuardia airport, for one – the governor said the Gateway Project and the Hudson River rail tunnels were the focal point of their meeting.

“The Gateway project … is really the construction of an entire corridor,” Gov. Cuomo noted. “It’s a $30 billion project because it has a number of projects” grouped together, including railroad bridges, trains stations, and tunnels.

The most urgent need, however, is the Hudson River tunnels because they have the longest lead time, he stressed.

“The tunnels are only one piece of the overall Gateway project, but a vital piece. They are inarguably in a state of decay and decline that is troubling and frightening.,” Gov. Cuomo noted. “They’re 100 years old. They were filled with saltwater from Hurricane-Superstorm Sandy. Once you immerse electric cables and metal conduits and relays in saltwater, only bad things happen afterwards. We’ve taken extensive efforts to try to repair, clean, [and] fix [them] but the condition is irreparable at this point. And it is only a matter of time before we have a serious mishap in one of those tunnels.”

Gov. Cuomo said he suggested setting up a corporation to handle this project, made up of three representatives: one from New Jersey, one from New York, one from the federal government. “Let that streamlined corporation manage the entire process, let it go to bid, let’s get the best bids,” he said. “The only estimates we have right now have been prepared by Amtrak because Amtrak owns the tunnel.”

That’s the process Gov. Cuomo said he and Trump “spent quite a bit of time” talking about. “He [Trump] knows these issues and he knows the questions of process and bidding and making sure the exposure is what everybody expects,” the governor added. “So it was a very productive conversation and we’ll be following up for next steps.”