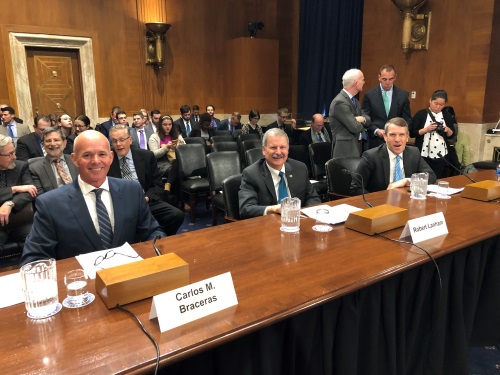 The Senate Committee on Environment and Public Works held an informational hearing on Nov. 28 that sought suggestions on how to generate funding to support U.S. surface transportation infrastructure needs now and into the future.

Carlos Braceras, executive director of the Utah Department of Transportation and president of the American Association of State Highway and Transportation Officials, testified along with Robert Lanham, vice president of the Associated General Contractors of America, and James Corless, executive director of the Sacramento Area Council of Governments.

All three stressed that fuel taxes need to be bolstered in the near-term while alternative funding mechanisms need to be explored in the future.

“Just to keep our current FAST [Fixing American’s Surface Transportation] Act funding levels, Congress has to find $90 billion in additional revenues for a five-year bill or $114 billion for a six-year bill,” Braceras noted in his written remarks. “At the same time, the purchasing power of [highway] trust fund revenues has declined substantially due to the flat, per-gallon motor fuel taxes that have not been adjusted since 1993, losing half of its value over the last quarter century.”

He said that ultimately means federal highway programs are expected to experience a 51 percent drop after the FAST Act expires in 2020, while federal transit programs would have to be “zeroed out” in 2021 and 2022.

“In the past, similar shortfall situations have led to cuts in federal reimbursements to states on existing obligations, leading to serious cash flow problems for states and resulting in project delays,” Braceras emphasized. “Simply put, this is a devastating scenario that we must do all we can to avoid.”

He noted that while federal investment has lagged, states have stepped up to “fill the gap,” with 31 states successfully enacting state-level transportation funding packages since 2012.

“In Utah, our legislature recently adopted an increase to the state fuel tax and indexed both the fuel tax and registration fees to keep pace with inflation. Also, we’ll be the second state in the nation to implement a road usage charge program,” Braceras pointed out. “But efforts by Utah and other states to fund the system ourselves are not enough. The federal government must step up its share of investment and it will not be easy.”

[Side note: Braceras is making workforce development, robust federal transportation funding and educating the public about the value of transportation his top emphasis areas as AASHTO’s president for 2018-2019.]

Both AGC’s Lanham and SACG’s Corless made similar points in their comments before the committee.

“It is impossible to address the future of the nation’s surface transportation program without first getting to the heart of our biggest challenge: the transportation ‘fiscal cliff’ that’s staring at us when the current FAST Act authorization expires in 2020,” Corless stressed in his testimony.

“By many accounts, we will have a financial hole to fill in the tens of billions. In filling this hole, we have two enormous challenges to confront,” he said. “First, we need a short-term fix that either means raising the federal gasoline tax or continuing stopgap funding solutions of the recent past. Second, we need to accelerate our efforts to deploy the successor to the gas tax. It’s my belief that whatever successor emerges as the favorite will need to be tested and deployed in a majority of the states before it’s adopted at a national level.”

“The time for infrastructure investment is now; the U.S. transportation infrastructure system’s needs cannot sustain a status quo approach to investment,” added AGC’s Lanham in his testimony. “Continued federal, state and local partnership is critical to the success of our national transportation system [but] a broad infrastructure package must include a sustainable, long-term solution to funding the Highway Trust Fund.”

He stressed that “none of these themes are new [and] in fact, I imagine that you have heard them before, time and time again. What’s different today, however, is that leaders on both ends of Pennsylvania Avenue and on all ends of the political spectrum agree that the addressing our nation’s transportation infrastructure is the top priority for the new Congress. And, this committee and its leaders are an essential component to making this priority a reality.”

“Surface transportation connects all of us [and] the time has come to cut red tape to make significant investments in roads and bridges and keep the HTF solvent,” Sen. Barrasso said. “And I agree that using a formula-based approach will allow states to use federal money to their best advantage, [for] what works best for Chicago and Los Angeles does not necessarily work in our rural communities.”

“I’ve long believed our committee can lead in bipartisan fashion on this issue,” added Sen. Carper.

“The role of government is to provide a nurturing environment for job creation – and building roads, bridges, and highways is big part of that,” he stressed. “Finding funding to keep the highway trust fund solvent, though, is the 800-pound gorilla in the room. I’ve shared with the president the idea of restoring the purchasing power of fuel tax and said we need a 25 cent per gallon increase and it should be done now. So the key to getting something done on financing side [for surface transportation funding] will be leadership.”