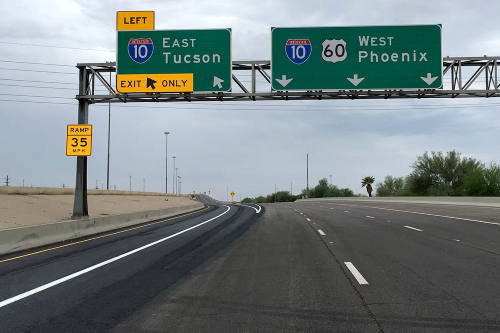 The Arizona Department of Transportation recently won two awards from the National Operations Center of Excellence; one for a series of lane adjustments and new signs that dramatically reduced minor rear-end crashes on westbound U.S. 60, known as Superstition Freeway, and another for a system being pilot tested on 15 miles of Interstate 17 outside Phoenix that aims to reduce the risk posed by wrong-way drivers.

“It takes a creative, passionate and dedicated team to develop and deliver improvements like these that make a significant difference for travelers,” noted Brent Cain, head of ADOT’s Transportation Systems Management and Operations division, in a statement. “Their work, in coordination with partner agencies, aligns with ADOT’s goals of improving safety and mobility throughout Arizona.”

The NOCoE – a partnership of the American Association of State Highway and Transportation Officials, the Institute for Transportation Engineers, and the Intelligent Transportation Society of America, with support from the Federal Highway Administration – awarded ADOT its “Best Transportation Systems Management and Operations Project Award” for the U.S. 60 safety improvements, while the wrong-way driver detection system received “runners-up” honors.

“Arizonans’ safety will always be our No. 1 priority,” Arizona Gov. Doug Ducey (R) said in a statement. “ADOT’s efforts to leverage technology and develop innovative solutions are bringing about real, measurable improvements to roadway safety. Arizona will continue to focus on how we can constantly improve the safety and reliability our roadways.”

In July, ADOT said changed lane striping and signage on U.S. 60 as it merged into eastbound I-10, improving overall traffic flow in the freeway’s left lanes. Compared to the five years before this improvement, crashes in those lanes have declined by 90 percent during afternoon peak hours.

During the 11 months of testing so far, the system detected more than 40 wrong-way vehicles, most of which have turned around on highway ramps without entering the freeway, ADOT said.

“Innovative approaches that better manage our infrastructure and incorporate cutting-edge technology are why we reorganized in 2015 to create a Transportation Systems Management and Operations division,” ADOT Director John Halikowski added in a statement. “At the heart of this is a commitment to safety and to creating the most reliable transportation system in the nation.”

More information on the TSMO awards program, including a listing of all the 2018 winners, is available at the NOCoE web site (https://transportationops.org/tsmoaward).