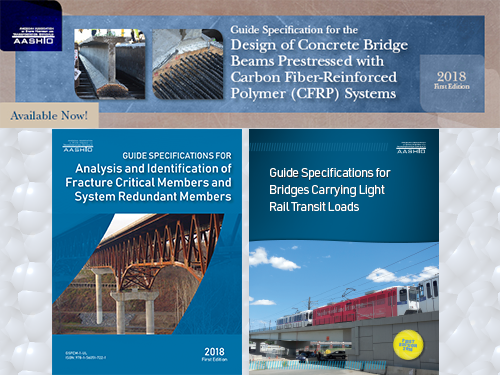 The first is “Guide Specifications for the Design of Concrete Bridge Beams Prestressed with Carbon Fiber-Reinforced Polymer Systems, 1st Edition,” which addresses the design of prestressed concrete beams constructed of normal weight concrete and those prestressed via CFRP systems.

Finally, the “Guide Specifications for Analysis and Identification of Fracture Critical Members and System Redundant Members, 1st Edition” delves into the critical role fracture critical members or FCMs play in bridge construction; items defined as steel primary members, or portions thereof, subject to tension whose failure would probably cause a portion of or the entire bridge to collapse.

AASHTO noted that the decision to designate members as FCMs has often been made without considering actual system redundancy or performance of the structure and that, prior to the development of these guide specifications, no standards existed on how to best conduct analysis and response to an FCM failure.