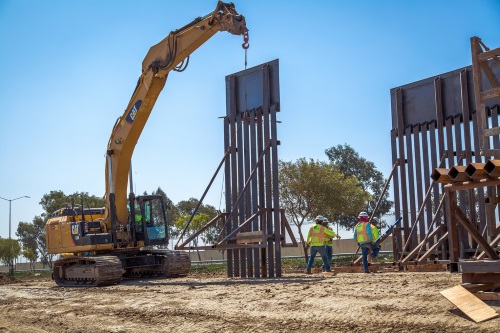 A rancorous debate over obtaining $5 billion to build a wall along the southern U.S. border with Mexico may result in a partial closure of federal agencies over the holidays.

[Above photo by Customs Border and Protection.]

Both the Senate and House of Representatives passed short-term continuing funding resolutions or CRs that would prevent a government shutdown and continue funding for critical federal programs and services through Feb. 8, 2019.

However, the House’s CR, passed late on Dec. 20, includes $5 billion for the construction of a “physical barrier” system at U.S. borders — monies available until September 30, 2023 — as well as $7.81 billion in additional supplemental appropriations for disaster relief from U.S. communities affected by wildfires, hurricanes, volcano and earthquake damage, plus typhoons.

By contrast, the Senate’s CR does not include that additional funding, either for the border wall or for supplemental disaster relief.

Meanwhile, President Trump remains adamant that any CR must include border wall funding or he will veto the measure, while Senate Democrats insist they will agree to no such funding inclusion.

“The bottom line is, the Trump temper tantrum will shut down the government, but will not get him his wall,” Sen. Chuck Schumer, D-N.Y., said in a C-SPAN interview on Dec. 20.

“Shutdown today if Democrats do not vote for Border Security!” the president said on his Twitter feed early on Dec. 21.

At stake is the fate of seven fiscal year 2019 appropriation bills that fund roughly 25 percent of the federal government, including the Departments of Transportation, Agriculture, Commerce, Justice, Housing and Urban Development, Interior, Treasury, Homeland Security, the Environmental Protection Agency, the National Aeronautics and Space Administration, and other related government programs.

“This year, we made great strides to get back to regular order – in fact funding nearly 75 percent of the government on time for the first time in over two decades,” noted House Appropriations Committee Chairman Rodney Frelinghuysen, R-N.J., in a Dec. 20 statement.

“I had hoped to continue this work with the remaining 25 percent of the federal government. However, as we’ve clearly seen over the past several weeks, there is still a broad ideological divide when it comes to securing our borders,” he added.

Senate Appropriations Committee Vice Chairman Pat Leahy, D-Vt., noted in a Dec. 12 release prepared by his staff that even a partial government shutdown will impact the USDOT and other federal-level transportation activities. For example, more that 30 percent of USDOT personnel – some 18,300 – would be furloughed if a shutdown occurs.

Air traffic control system workers, along with aviation, pipeline and railroad safety inspectors are among those who would continue to work, according to an Associated Press story detailing federal agency shutdown plans.

But certification of new aircraft will be limited and processing of airport construction grants, training of new controllers, registration of planes, air traffic control modernization research and development, plus the issuance of new pilot licenses and medical certificates will stop.

At the National Highway Traffic Safety Administration, automotive safety defect investigations would be suspended, incoming information on possible defects from manufacturers and consumers won’t be reviewed, and compliance testing of vehicles and equipment will be delayed.

The Federal Highway Administration and the Federal Motor Carrier Safety Administration, whose operations are mostly paid for out of the Highway Trust Fund, will stay open in the main as federal gas and diesel taxes will continue to be collected. But work on issuing new regulations will stop throughout the department and its nine agencies.

Other federal employees would have to work without pay, Leahy’s office noted, including: 54,000 Customs and Border Protection agents and customs offers; 42,000 Coast Guard employees; up to 5,000 Forest Service firefighters; and 3,600 National Weather Service forecasters.

In terms of 2019 funding, the Transportation-Housing and Urban Development or THUD bill – originally delayed back on Sept. 26 and pushed back again by a two-week CR passed on Dec. 7 – provides $71.4 billion in discretionary spending for USDOT and HUD, along with other related agencies, which is $1.1 billion above fiscal year 2018 enacted levels.

It also provides $49.3 billion for critical highway infrastructure, an increase of $3.3 billion above the Fixing America’s Surface Transportation or FAST Act’s authorized levels, with $800 million of that increase targeted to bridges in rural areas.

State DOT Panel Explores How to Turn Data into Decisions