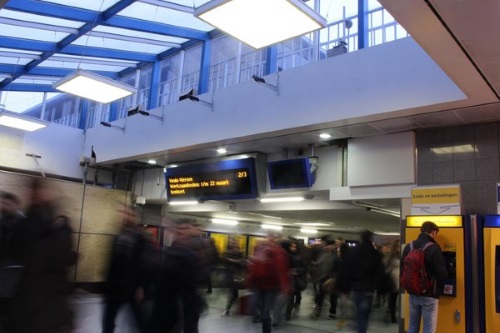 A research study conducted by two physicists at Eindhoven University of Technology in Holland has developed a “statistical model” that can accurately predict pedestrian movements based on the number of people occupying a “defined area” such as a corridor or tunnel.

[Above photo by Alessandro Corbetta.]

Professor Federico Toschi and Alessandro Corbetta, a post-doctorate researcher, studied 5 million pedestrian movements at Eindhoven’s train station and found that many “unconsciously” adapt their pathway their way to pass each other and prevent collisions.

“To build our model, we found two ‘social interaction forces’ that play a role: a long-distance force based on vision and a short distance force for preventing hard contacts,” noted Corbetta in a statement. “As an effect of these forces, people modify their current paths to prevent collisions.”

Their research – conducted within the Turbulence and Vortex Dynamics group at the Department of Applied Physics at Eindhoven University, along with help from mathematicians at the California State University and physicists from the University of Tor Vergata in Rome, Italy – indicates that people want to keep on average a distance of at least 30 inches between one another.

Using sensors to track pedestrian movements, Toschi also noted that about one in 1,000 people would stop walking an “invert their trajectories” in order to exit the tunnel or corridor from the same side as they entered it – even though they were walking alone and regardless of the motivation. “Performing real-life experiments is critical to push our understanding; you would never have measured these features in a lab experiment where participants are instructed to execute actions,” he explained.

Toschi and Corbetta said they are planning to deploy the findings from their research – now published in the Physical Review E journal – in an experiment using light with different intensity levels to “alter routing decisions” of pedestrians to preferred exits; an effort that could help “steer” pedestrians along the safest pathways established by transportation designers in corridors and tunnels.

“The first results now indicate that it does indeed appear to be possible to steer people,” Toschi said. “We aim at publishing results soon.”