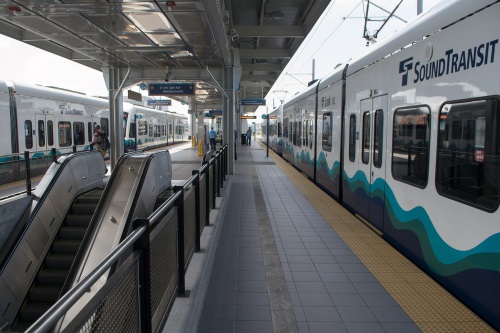 [Above photo by Sound Transit.]

FTA added that the Lynnwood Link project received $100 million in fiscal year 2018 CIG funds back in September and that Sound Transit is also approved for up to $658 million in USDOT credit assistance through the Build America Bureau under the Transportation Infrastructure Finance and Innovation Act or TIFIA program to help it complete this light rail line.

FTA Acting Administrator K. Jane Williams noted in a statement that Lynnwood Link will expand light rail service between Seattle and some of its most populated northern suburbs, including Shoreline, Mountlake Terrace, and Lynnwood.

The Lynnwood Link project includes the construction of 8.5 miles of grade-separated light rail as well as: four new rain stations; 34 vehicles; 1,500 parking spaces; and a new maintenance and storage facility. It will connect to the broader Link light rail network, including the existing system from Angle Lake to the University of Washington and the Northgate Link and East Link segments currently under construction, the agency noted.