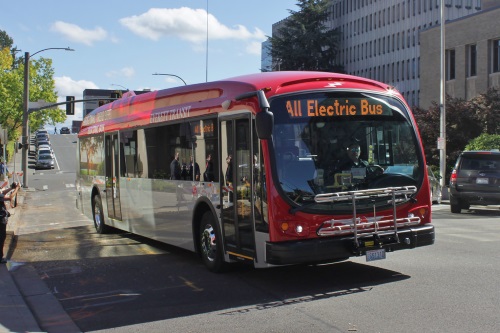 The California Air Resources Board issued a new rule on Dec. 14 that sets a “statewide goal” for its 200 public transit agencies to gradually transition to 100 percent zero-emission buses by 2040; a changeover that affects 12,000 units across the state.

[Above photo by Proterra.]

The agency noted in a statement that its Innovative Clean Transit regulation is part of a statewide effort to reduce emissions from the transportation sector, which CARB said accounts for 40 percent of climate-changing gas emissions and 80 to 90 percent of smog-forming pollutants.

CARB added that eight out of the 10 largest transit agencies in California already operate “zero-emission” buses, including both battery electric and hydrogen-powered fuel cell models. Statewide, 153 “zero-emission” transit bus models are in operation right now, with 1,000 expected to be deployed by 2020, based on the number of buses on order or that are otherwise planned for purchase by transit agencies, CARB said.

[Foothills Transit is one such California transit agency already transitioning to “zero-emission” buses; in this case all-electric models.]

To successfully transition to an all zero-emission bus fleet by 2040, CARB’s new rule requires each state transit agency to submit a “roll-out plan” demonstrating how it plans to purchase zero-emission buses, build out necessary infrastructure, and train the workforce required to maintain them.

The roll-out plans are due in 2020 for large transit agencies and in 2023 for small agencies, CARB added.

Agencies will then follow a phased schedule from 2023 until 2029, CARB said, by which date 100 percent of annual new bus purchases will be zero-emission. To encourage early action, the zero-emission purchase requirement would not start until 2025 if a minimum number of zero-emission bus purchases are made by the end of 2021, the agency stressed.

CARB also expects California’s 200 transit agencies to save $1.5 billion in maintenance, fuel, and other costs by 2050 after the full roll-out of zero-emission buses and related infrastructure is completed.