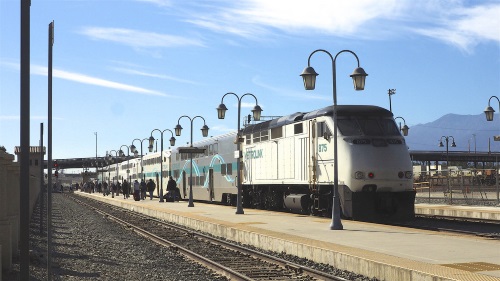 [Above photo of Metrolink by Clay Gilliland.]

Concurrently, the FRA awarded more than $46 million in grant funding on Dec. 21 for 11 projects in 10 states to further assist with the deployment of PTC systems – the second round of some $250 million in total funds authorized by the Fiscal Year 2018 Consolidated Appropriations Act and via the Consolidated Rail Infrastructure and Safety Improvements or CRISI program.

The agency released an initial tranche of $203 million worth of PTC grant funding out of that $250 million in August.

[How does PTC technology work? Union Pacific explains it in the video below.]

However, another 33 railroads and three tenant-only commuter railroads covered by the mandate submitted written notification requesting FRA’s review and approval of an alternative schedule – with each railroad providing appropriate documentation demonstrating that they met the six statutory criteria necessary to qualify for such a schedule.

As of Dec. 31 last year, FRA had only formally approved nine of those requests for a two-year compliance extension, with the agency noting it has 90 days to approve the remainder.