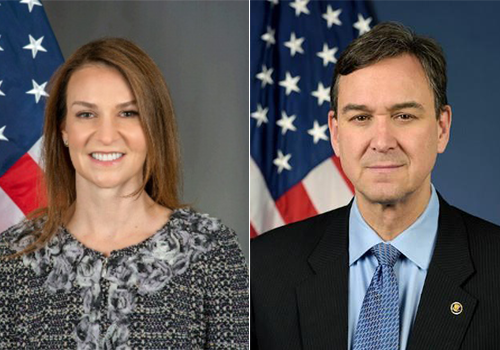 President Trump has nominated Nicole Nason (above, left) to be the next administrator of the Federal Highway Administration; one of 17 nominations the president sent to the Senate on Jan. 3. Concurrently, the Senate confirmed Joel Szabat (above, right) to be the assistant secretary for aviation and international affairs within the U.S. Department of Transportation on Jan. 2 by a voice vote.

Nason – who is currently assistant secretary of the Bureau of Administration within the U.S. Department of State – spent five years in multiple transportation roles within the federal government.

From 2003 to 2006, she worked as assistant secretary for government affairs at the U.S. Department of Transportation, then served as Administrator of the National Highway Traffic Safety Administration from 2006 to 2008, where Nason oversaw the development of new seat belt rules for school buses, rulemaking for electronic stability control systems, and the formulation of crash test rating criteria for the Five-Star Safety Ratings program.

Prior to her transportation tenure, Nason spent a year as the assistant commissioner for government affairs at the U.S. Customs and Border Protection and also served as counsel for the U.S. House Committee on the Judiciary and as press secretary for former Rep. Porter Goss, R-Fla., when he served as chair of the House Permanent Select Committee on Intelligence prior to his tenure as director of the Central Intelligence Agency.

His transportation career includes stints as executive director of the Maritime Administration from 2012 to 2018, as well as a previous tour with USDOT overseeing transportation policy plus management and budget details. He’s also a former U.S. Army tank commander.

The Senate also confirmed two new members of the Surface Transportation Board on Jan. 2 by voice vote as well: Patrick Fuchs and Martin Oberman.

Fuchs has served on the staff of the Senate Committee on Commerce, Science, and Transportation for four years, most recently as the senior professional staffer for the subcommittee on Surface Transportation & Merchant Marine Infrastructure, Safety, and Security.

In a statement, Sen. John Thune, R-S.D. – who will remain on Commerce Committee and several others as he steps up to become the Senate’s Majority Whip in the 116th Congress – said Fuchs’ “knowledge and expertise as a member of the Commerce Committee staff has been a vital asset over the past four years. I wish him the best of luck and look forward to working with him in his new role.”

Oberman is a former Chicago alderman and served as chairman of the city’s Metra public transit agency for nearly four years. President Trump nominated Oberman, a Democrat, to the STB in July 2018.