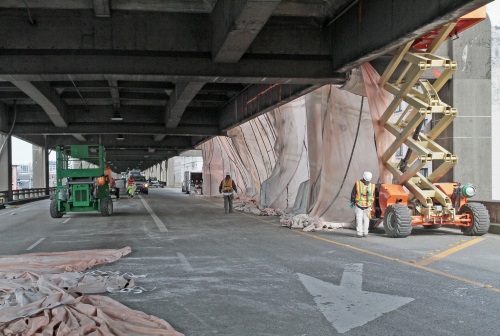 On Friday night, Jan. 11, the Alaskan Way Viaduct in downtown Seattle – also known as State Route 99 – will be permanently shut down; marking the start of roughly three weeks of intensive construction work to move traffic into the new $3.3 billion, 2-mile-long SR 99 tunnel.

In a Dec. 10 blog post, the Washington State Department of Transportation noted that the Viaduct’s closure “is going to be rough” as more than 90,000 vehicles travel the elevated roadway each day and history shows that congestion worsens on all of the roads in the Seattle area considerably during a viaduct closure.

The agency added that the shutdown and three-week construction effort will create the longest highway closure ever experienced in the Puget Sound region as it also involves the removal of detour routes created to help prep for the tunnel construction process.

“Reducing trips during the closure will help everyone,” she noted in a statement. “Any adjustments you can make – whether it’s trying a mode of transportation other than driving, trying to form a carpool, teleworking or canceling non-necessary trips – will make a difference. We understand this isn’t a possibility for everyone all the time, but every little bit helps.”

Newborn added that those planning to travel anywhere near Seattle during the three-week closure period, consider changing how you get around either by working from home, using bus, light rail or Sounder trains, or by using the city’s Water Taxi, share a ride, walk or bike programs.

[WSDOT also noted that, once the SR 99 tunnel is open to traffic, it will begin work on dismantling the Viaduct roadway.]

“If you can change your [transportation] routine even for as little as one day a week, it will lessen the strain on your neighbors and on yourself,” she stressed.

More on the project is available at www.alaskanwayviaduct.org.