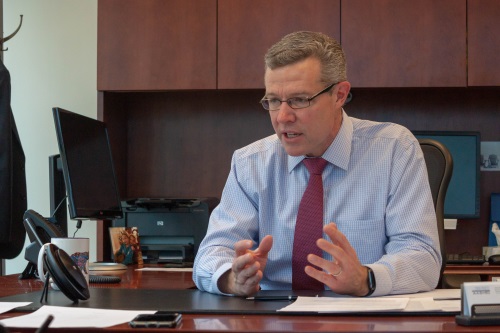 As the partial shutdown of the federal government over border wall funding stretches past 20 days, some state departments of transportation are beginning to curtail planning for new projects while several mass transit systems are scrambling as many rely on federal grants for both operating revenues and capital funding.

In his first media briefing as the new executive director of the American Association of State Highway and Transportation Officials, Jim Tymon (pictured above) explained that since the 115th Congress did not pass Fiscal Year 2019 appropriations for seven of the 12 annual spending bills, including the Transportation-Housing and Urban Development or THUD package, states to date are limited to only about a quarter of the federal funding they are scheduled to receive this year.

However, he stressed in the Jan. 8 conference call that the U.S. Department of Transportation employees paid out of the Highway Trust Fund – including all Federal Highway Administration employees – are reporting to duty with pay as usual and that FHWA is able to continue reimbursing states for projects approved prior to the shutdown.

“I think what you’ll see in the short term is states finding ways to move money around from different pots in order to keep their systems operating as efficiently as possible. It’s not something they can do forever,” Tymon said on the call. “The longer this drags on, you’re going to see states start to draw back on their letting for new projects because they won’t have their full allocation of federal money for 2019 yet.”

For example, while a Jan. 8 FHWA funding notice makes $30 billion worth of FY 2019 transportation funding available to be committed by states as authorized under the five-year Fixing America’s Surface Transportation or FAST Act, the agency also said that it would be “inadvisable” for states to commit a large amount of new federal dollars provided under today’s notice.

For example, if there is a new continuing resolution from Congress lasting just 30 days, any dollars obligated beyond that prorated amount (i.e., 30/365th of full year funding) would then have to be deobligated or returned to FHWA.

Tymon added that the effect of this past Tuesday’s FHWA notice is that even if full FY 2019 highway dollars are now technically available, for all practical purposes, states can’t really commit all of those dollars because there’s a real risk of having to return some of them if the shutdown ends with another continuing resolution.

“This remains a fluid situation and is becoming one with less and less precedence,” he pointed out.

In terms of transit concerns, the Citrus Connection bus system in Lakeland, Florida, has been drawing from annual operating cash and cash reserves to stay open; a tactic it told The Ledger newspaper that will no longer be possible if the delay on federal payments extends to mid-February. That’s because 50 percent of the local bus agency’s funding comes from federal sources, Citrus Connection Executive Director Tom Phillips told the paper on Jan. 9

Another worry among state DOTs is how a prolonged federal shutdown could impact the spring/summer construction season.

Oklahoma DOT Executive Director Mike Patterson explained in a presentation before the Oklahoma Transportation Commission on Jan. 7 that roughly 45 upcoming highway, county road, and city street projects set to go out for bid in January and February totaling more than $137 million had to be delayed due to the lack of federal funding authorization.

“While we’re very grateful that the Highway Trust Fund remains available to pay for the federal share of projects already under construction, the inability to award new contracts with federal funds could delay some projects from starting for several months.” Patterson said. “If this budget impasse continues, contractors could miss out on some of this year’s prime construction season in the spring and summer.”