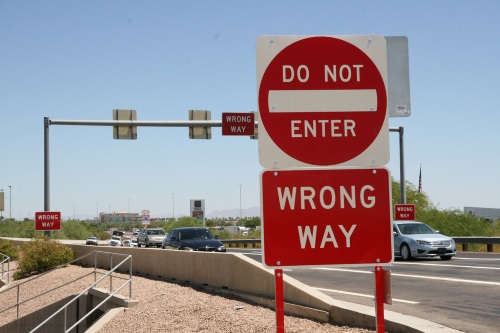 Roughly 20 freeway ramps along U.S. 395 in northern Nevada will be closed intermittently through Jan. 15 as the Nevada Department of Transportation installs and activates a new “wrong-way driver” detection and alert system.

[Above photo by Arizona DOT]

The agency said in a Jan. 8 statement that the system uses radar and closed-circuit cameras to automatically detect vehicles entering a highway in the wrong direction, activating two sets of red flashing wrong-way signs on the ramp.

The Nevada DOT added that, to get help stop drivers from entering the freeway in the wrong direction, the system’s first set of signs stands four feet high instead of the standard seven-foot sign height in order to “more readily reach the lower eye level of sleepy or impaired drivers.”

The Nevada DOT added that between 2005 and 2015, there were 409 wrong-way crashes in Nevada resulting in 75 deaths. For the U.S. as a whole, the Transportation Research Board said an average of 360 deaths occur nationwide every year due to wrong-way driver crashes, with more than half of wrong-way drivers involved in such crashes impaired by alcohol.

The agency pointed out that it is one of a handful of state DOTs pilot testing the wrong-way driver detection systems, noting that preliminary research shows that such systems are 80 percent effective in stopping them.