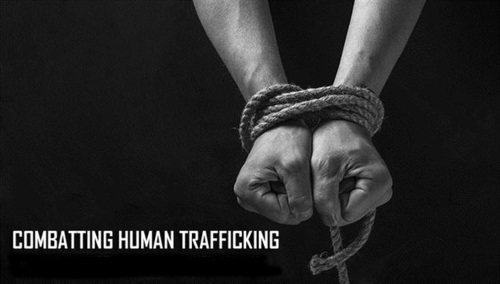 Human trafficking is the exploitation of people using force, fraud, or coercion for the purposes of commercial sex, forced labor, or domestic servitude and – according to the International Labor Organization – there are 21 million victims of human trafficking globally, generating $150 billion annually for traffickers.

[Above photo by the U.S. Air Force]

The month of January this year being recognized as “Human Trafficking Awareness Month,” with Jan. 11 marking #WearBlueDay to raise awareness regarding this international scourge – a crime the Pennsylvania Department of Transportation is helping fight in concert with other state agencies.

“Human trafficking is happening across the world and, unfortunately, right here in Pennsylvania,” noted PennDOT Secretary Leslie Richards said in a statement on Jan. 7. “We and other agencies are addressing this issue and we’re also raising public awareness about this horrible practice.”

She noted that PennDOT was one of the first state government agencies in the U.S. to educate its employees on human trafficking awareness, with all staff at driver’s license centers and Welcome Centers receiving training.

[In the video below, Emma Lowe, special assistant to PennDOT’s Richards, interviews Shea Rhodes, co-Founder and director of the CSE Institute at Villanova University, talk about the crime of human trafficking and how the transportation industry can help eradicate it.]

In 2017, the agency said 562 calls were received, and they led to 199 reported cases, of which 154 dealt with sex trafficking, 23 dealt with labor trafficking, 15 were not specified as either, and seven were a combination of both.

While demographic data isn’t available for every 2017 case in Pennsylvania, available data illustrates the lives impacted by human trafficking: 168 of the survivors were female and 19 were male. Fifty-four were children and 120 were adults, and 41 victims were U.S. citizens or legally present residents, while 27 were foreign nationals.

“The Pennsylvania State Police works every day with our local and federal law enforcement partners to prevent, identify, and investigate human trafficking, but we cannot be everywhere,” said Captain Derrick Baker, director of Pennsylvania State Police’s Special Investigations Division, in a statement. “By educating themselves on the warning signs, and calling authorities when things don’t seem right, the public can help police in our mission to fight human trafficking in Pennsylvania.”

“Human trafficking is the fastest growing criminal industry in the world, targeting the most vulnerable in our communities – and is destroying the lives of an entire generation of victims,” stressed Tiffany Chang Lawson, executive director of the Pennsylvania Governor’s Commission on Asian American Affairs. “It is a human rights crisis that cannot be fought alone by local law enforcement agencies, and that’s why partnerships like these are so incredibly important.”