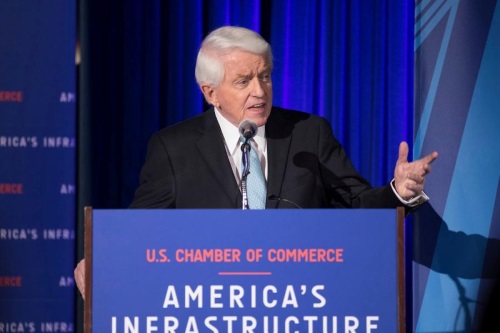 Tom Donohue, president and CEO of the U.S. Chamber of Commerce, (pictured above) stressed that “infrastructure is integral to opportunity” in order to sustain the current economic growth experienced by the United States and said infrastructure modernization will be a key part of the Chamber’s agenda for 2019.

[Above photo by U.S. Chamber]

“Our highways, bridges, ports, and waterways have long stood as monuments to American achievement – and they have literally moved the American Dream,” he said during the organization’s 2019 State of American Business address held on Jan. 10 at the Chamber’s headquarters in Washington, D.C.

“We want to keep it that way, which means we face the crucial task of modernizing the physical platform of our economy, much of which has already outlived its lifespan,” Donohue pointed out. “Nearly everyone agrees that investing in our infrastructure is a major national priority – what’s missing is a sense of urgency. Things are only going to get worse, which is why we are calling on our leaders to pass a significant infrastructure package this year.”

[Donohue delved into that issue more deeply last year as part of the Chamber’s advocacy of a fuel tax hike to fund infrastructure investments.]

In order to generate more “viable solutions” for infrastructure funding, he said the Chamber will offer $25,000 in cash prizes to those who can come up with the “best, most viable ideas” for a long-term sustainable funding mechanism. “We want to hear from everyone –students, academics, business leaders, the people out there doing the building – everyone,” Donohue emphasized. “We’ll consolidate and publish all of the good ideas we receive – and we’ll have a big debate starting February 5th at our annual Infrastructure Summit.”

Jim Tymon, the new executive director of the American Association of State Highway and Transportation Officials, also emphasized the importance of providing infrastructure that ultimately provides more transportation options now and in the future.

State DOTs are also “less concerned” about what modes are used to move people and goods, he explained in conference call with reporters on Jan. 8. Rather, they are more focused on “making sure all modes are working efficiently so people and businesses have choices,” Tymon said.

“Federal transportation infrastructure investment has traditionally unified political parties around the common belief that transportation serves all Americans,” he noted. “AASHTO believes that – despite the current state of politics here in Washington, D.C. – transportation can be a common-ground issue that leads to real progress this year.”

Tymon pointed out that, over the last five years, 27 states and the District of Columbia voted to increase motor fuel taxes to help fund more investment in transportation infrastructure.

“But don’t mistake the success of raising revenue at the state level as an excuse for the Federal government to walk away from their responsibility,” he added. “While the states cover more than half of the cost to build, operate, and maintain the nation’s highways and bridges, they cannot do this work alone. They need a strong federal partner.”

That’s a theme the Chamber’s Donohue also stressed in his Jan. 10 remarks.

“I’ve been working on these issues for more than 30 years [and] it is my hope that the public and private sector leaders of this country will finally come together and help build the next generation of U.S. infrastructure; a modern, safe, and efficient system that history will regard as one of the great American feats of the 21st century,” he said.