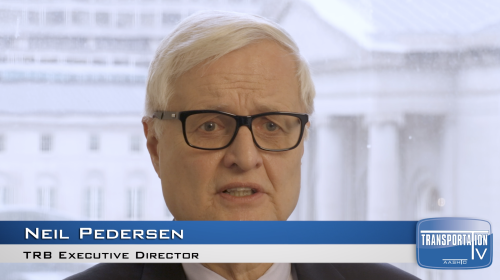 The 98th Annual Transportation Research Board Annual Meeting kicks off Sunday, Jan. 13, in Washington D.C. at the Walter E. Washington Convention Center and will run through Jan. 17.

TRB Executive Director Neil Pedersen (pictured above) explained in a Transportation TV interview that this yearly conference, which attracts more than 13,000 participants from around the world, is moving forward as planned despite the ongoing partial federal government shutdown.

Carlos Braceras – executive director of the Utah Department of Transportation and the 2018-2019 President of the American Association of State Highway and Transportation Officials – is one of several executives from 30 state DOTs volunteering their time at this year’s TRB meeting to participate as panelists and moderators on a number of topics.

Braceras will participate in a seminar entitled “Today’s Teen, Tomorrow’s Transportation Professional: Adapting and Preparing for the Future of Work,” as workforce development is one of his top three priorities during his one-year term as AASHTO’s president.

The first – entitled “Workforce Development Innovations from State Departments of Transportation” to be held Tuesday, Jan. 15, from 10:15 am to 12:00 pm in Ballroom B – focuses on the “growing awareness” the ability to build, maintain and manage an increasingly sophisticated transportation system depends on a highly skilled workforce.

The second – called “Reauthorizing the Federal Surface Transportation Programs: The State DOT Perspective” and also to be held on Tuesday, Jan. 15, from 1:30 pm to 3:15 pm in Ballroom B – will address the long-term sustainability of the Highway Trust Fund, streamlining program and project delivery, harnessing emerging technology, and improving safety.

AASHTO will also be participating in the Careers in Motion Networking Fair being held on Jan. 13 from 10:00 a.m. to 2:00 p.m. in Exhibit Hall A at the convention center. Located at booth B341 within the networking fair, the organization said this networking event serves as an “opportunity” for attendees to meet perspective employers from a vast range of multimodal disciplines.

The National Operations Center of Excellence also plans to announce its annual Transportation Systems Management & Operations award winners on Jan. 13 during the TRB Meeting’s opening reception at 5:00 p.m. at the AASHTO booth #935. Those awards are designed to celebrate the use of TSMO and encourage its expansion throughout the United States, noted Patrick Son, NOCoE’s managing director.