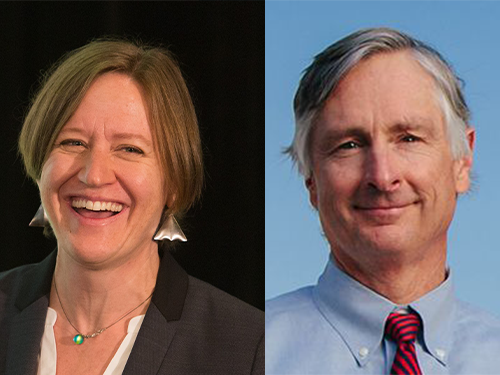 Gov.-elect Bill Lee nominated H. Clay Bright III (above at right) to be the next commissioner of the Tennessee Department of Transportation on Jan. 15 – a nomination that must be approved by the state’s legislature – while District of Columbia Mayor Muriel Bowser hired Linda Bailey (above at left), currently the executive director of the National Association of City Transportation Officials, as director of the newly-created “Vision Zero Office” within the District Department of Transportation; a position she’ll officially fill in March.

Bright – a construction industry veteran who’s spent his entire 36-year career with Alabama-based general contractor Brasfield & Gorrie – has been involved in some of the largest and most complex projects in Tennessee, according to the Times Free Press, including the construction of the 33-story AT&T Building in downtown Nashville.

As the Tennessee DOT’s new commissioner, Bright will head one of the largest agencies within Tennessee’s government as it sports a budget of some $2.4 billion.

Meanwhile, DDOT’s Bailey – who served as NACTO’s executive director for four years – will be leading the agency’s initiative to eliminate all traffic fatalities and serious injuries in the District of Columbia.

DDOT is in the process of implementing “No Turn on Red” at 100 intersections and installing new infrastructure at nearly 100 intersections to safeguard pedestrians against left turning vehicles; part of an effort to bolster new Vision Zero regulations that took effect Jan. 4 this year that are designed to enhance safety for all roadway users.

“I’m proud to have the opportunity to serve the residents of the District of Columbia and broaden the mission of Vision Zero,” said Bailey in a Jan. 16 statement. “I am grateful to Mayor Bowser and [DDOT] Director [Jeff] Marootian for their confidence in me, and I am committed to promoting safety, and the kind of innovation that builds on DDOT’s position as a leader among the nation’s transportation agencies.”

Prior to joining NACTO, Bailey worked for the New York City Department of Transportation where she played a key role in developing the agency’s Vision Zero Program. She holds a Bachelor of Arts and a Master of Urban Planning from the University of Michigan and is a member on the Committee on Large Cities for the Transportation Research Board.