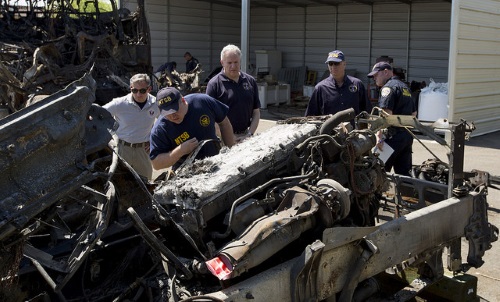 A new 35-page report from the Governors Highway Safety Association identifies “excessive vehicle speed” as a persistent factor in nearly one-third of all motor vehicle-related fatalities and particularly threatens the safety of pedestrians and bicyclists by not only increasing the chances of a crash, but also increasing the risk of serious injury or death when crashes occur.

[Above photo by the National Transportation Safety Board.]

“If we want to get to zero deaths on our roads, we need to address speeding on a much deeper and more comprehensive level than we have been,” noted GHSA Executive Director Jonathan Adkins in a statement on Jan. 15. “This clear and present danger on our roadways makes it imperative to devote additional resources toward getting drivers to slow down in order to save lives.”

The group’s new report – entitled Speeding Away from Zero: Rethinking a Forgotten Traffic Safety Challenge – takes what it calls a “fresh look” at speeding-related crashes, noting for example that a greater proportion of speeding-related fatalities actually occur on rural roadways; crashes that claimed more than 5,000 lives in 2016 alone.

The GHSA report recommends that a number of national, state, and local-level actions be taken to reduce speed-related vehicle deaths, including:

A study conducted last year by Penn State University bolstered some of those points, as researchers found that setting speed limits set only five miles per hour below engineering recommendations produces a “statistically significant decrease” in fatal, injury, and property-damage-only crashes.

That study – supported by the Montana Department of Transportation and the Federal Highway Administration – also found that “the presence of heavy law enforcement” in zones with low posted speed limits resulted in motorists reducing their speed by an average of four mph, while generating greater overall “speed-limit compliance.”

However, Vikash Gayah – an assistant professor of civil engineering at Penn State who worked on that study – noted that if speed limits are lowered by 10, 15, 25 miles per hour or more below traffic engineering recommendations, motorists “stop paying attention” to them.

Speed limits are normally set based on results from engineering studies that collect free-flow traffic data and then select an appropriate speed using a statistical model, he explained, but factors such as school zones, citizen or political pressure, plus “perceived” safety issues contribute to the fairly common practice of lowering speed limits below engineering guidelines, the researchers said.

“We found there was an increase in fatal and injury crashes at locations with posted speed limits set 10 miles per hour or more below engineering recommendations,” Gayah noted. “The practice of setting speed limits lower than what would be recommended from an engineering study is okay if it’s only by a little — by five miles per hour.”