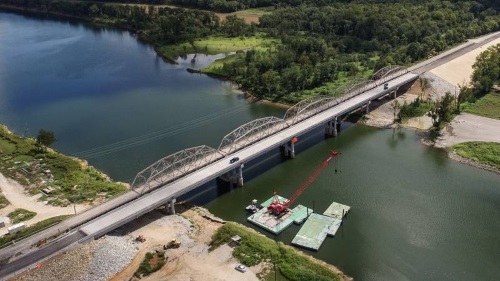 Governor Michael Parson (R) highlighted what he called several “long-term investments” in Missouri’s transportation infrastructure during his first “State of the State Address” on Jan. 16.

[Above photo by Missouri DOT.]

The biggest piece of that infrastructure plan is $351 million set aside in the state’s fiscal year 2020 budget for the Missouri Department of Transportation to “begin immediate work” on nearly 250 bridges in need of “critical repair or replacement.” A further $50 million will fund a “transportation cost share program” to assist cities and counties with addressing the “most serious infrastructure needs in our local areas,” Gov. Parson said in his speech.

“I firmly believe the people of Missouri are eager to have leadership that will propose bold ideas and is willing to tackle tough issues that have been put off too long,” he added. “My administration is focused on making significant investments in workforce development and infrastructure, reforming and restructuring government responsibilities, and saving for the future. We look forward to working with the legislature to move Missouri forward.”

Parson, who became governor in June last year following the resignation former Gov. Eric Greitens, focused primarily on workforce development and infrastructure spending in his speech before the state legislature.

“I stand before you today to share a vision — a vision that will chart Missouri’s future into the next decade,” Parson told lawmakers.

“When we try to make everything a priority, the fact is nothing is truly a priority,” he said. “So let me be crystal clear: Cultivating and training our workforce for high-demand jobs and investing in critical infrastructure are the priorities we must address this session.”