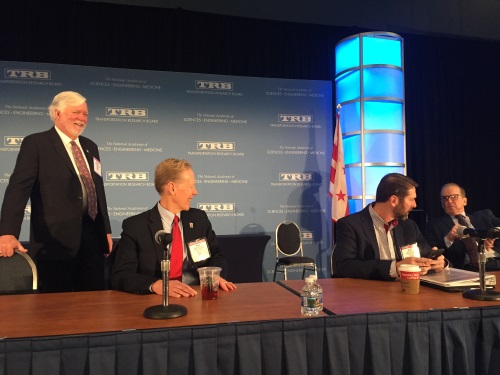 New tactics are being deployed by several state departments of transportation to address the growing difficulties in recruiting and retaining workers across a number of disciplines, from engineering and finance to entry-level labor and equipment maintenance positions.

“One of things we are doing is sounding the alarm; just broadcasting the facts about our workforce situation,” noted Roger Millar, secretary of the Washington State Department of Transportation, during a panel discussion Jan. 15 at the 2019 Transportation Research Board’s annual meeting in Washington, D.C.

He used WSDOT as an example of the industry’s workforce issues: an agency with a $3.2 billion budget that employs 7,000 across Washington state.

Yet while pay is important, Millar said for WSDOT to become and remain an “employer of choice” will take more than just money: “We need to commit to our workforce so they will commit to us. If you want respect and loyalty [as a state DOT] you need to show it,” he stressed.

For example, Millar said two-thirds of WSDOT’s employees are on “flexible work schedules” that are not traditional “nine-to-five” shift, with another 15 percent telecommuting. The agency is also pilot testing in-house daycare in order to retain new parents. “Daycare is expensive and by doing this we’re building loyalty with those parents; they end up sticking around for a while,” he noted.

Millar added that WSDOT also creates a lot of “gig” part-time/temporary employment to give retired employees work. “That keeps a lot of our expertise in house,” he explained, adding that the agency is also providing a lot of training and giving people “access to interesting new stuff” to keep workers on board.

[This TRB session was one of two featuring state DOT executives. You can access the other story by clicking here.]

“It’s part of an effort to try and be that preferred place to work – not just to be a hard, cold transportation firm,” he said. “We’re a charter member of the Women in Transportation organization; that’s another way we’re supporting the effort to build diversity in our workforce. We’ve got ground to make up.”

Another issue is the buildings in which Oklahoma DOT employees find themselves working. “Many of our maintenance facilities out in our counties were built in 1930s; they are 70 years old in some cases,” Patterson said. “That means many are not structurally functional – meaning many maintenance employees are changing snow plows out in the yard, in the snow, at 2 a.m. Who wants to do that? And if the working conditions are terrible, how long are they going to stay there? So we’re trying to modernize our facilities as we go forward.”

Scott Bennett, director of the Arkansas Department of Transportation, added that maintenance workers, truck drivers, and day laborers are becoming “some of the hardest positions to fill” within his organization.

For that reason, his agency is looking at recruiting workers from more “non-traditional” labor pools, as well as partnering with two-year educational institutions to offer more vocational training opportunities to train a new generation of plumbers, welders, and the like.

“A lot of folks in homeless shelters are looking for jobs; they’ve just fallen on hard times,” Bennett said. “So we’re starting to partner with homeless shelters and Goodwill to hire workers for our maintenance/labor areas. If they don’t have a GED [General Equivalency Degree] we’ll help them get them one. The only thing they have to pass is a drug test; if they can do that, we can help them get their feet back on ground. Even if only one out of 10 works out, that still helps us.”

John Schroer, now-retired as commissioner of the Tennessee Department of Transportation, added that many state DOTs have a built-in advantage as they can offer jobs in rural parts of their states; areas that may not have as many employment opportunities compared to more urbanized locales.

“Many people want to stay in their communities and a DOT job is a valuable one in those areas; it can attract good people,” he said.

“It’s an option if you don’t have a college path – we can provide a career path. Come work for us and here is what can happen: we’ll pay you a decent salary, provide health insurance, and provide educational opportunities,” Schroer stressed. “Also, people in DOTs consider themselves family. It’s universal; I’ve seen it all across the country – they want to stay there; they like that community. But they also have to provide for their families. So we need to figure out ways to keep doing that.”