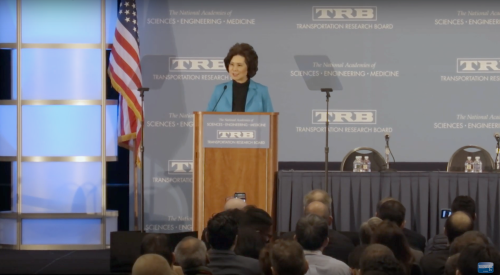 The first of those proposed regulations would allow drones to fly overnight and over people without waivers, if certain conditions are met; part of a “philosophy to encourage the widest possible development of safe new transportation technologies, so consumers and communities can choose the mix of options that suits them best,” she explained.

“Let me note that the department [USDOT] is keenly aware that there are legitimate public concerns about drones, concerning safety, security, and privacy,” Chao noted in her Jan. 14 speech. “Recent events overseas have underscored concerns about the potential for drones to disrupt aviation and the national airspace. So along with this new proposed rule, the department is finishing up two other proposals to address drone safety and national security.”

That second proposal would identify “major drone safety and security issues” that may pose a threat to other aircraft, to people on the ground, or to national security and will solicit for consideration recommendations to reduce these risks as drones are integrated into U.S. airspace.

The FAA added that this pilot project, which will be conducted through September 2019, is intended to develop and demonstrate a traffic management system to safely integrate drone flights within the nation’s airspace system. Also, the pilot project will create a “shared information network” to help gather data that can be used for future rulemakings.