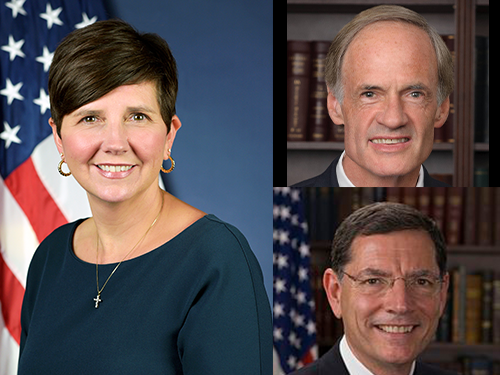 The annual “Washington Briefing” legislative conference organized by the American Association of State Highway and Transportation Officials provides an opportunity for state department of transportation leaders and transportation industry executives to hear from and interact with key Capitol Hill policymakers on a range of issues, from infrastructure funding to autonomous vehicles.

AASHTO’s 2019 Washington Briefing will be held from Feb. 26 through March 1 at the Washington Court Hotel. The meeting’s initial lineup of speakers promises to provide insights into key challenges such as alternative funding mechanisms to traditional fuel taxes to support the maintenance, repair, and expansion needs of the nation’s surface transportation system.

Sen. John Barrasso, R-Wyo., chairman of Senate Committee on Environment and Public Works, will present his take on some of those issues at AASHTO’s annual legislative conference – echoing points he made at the Washington Briefing last year.

Sen. Barrasso noted in an EPW hearing last November that surface transportation infrastructure drives the health, the well-being, and the prosperity and that the nation “depends on highways, roads, and bridges to move people and goods, to get to our jobs, and to visit our loved ones.”

However, he said that “for far too long we have not prioritized the needs of these vital infrastructure systems.”

As a result, “New funding is needed to keep pace with the demands, and burdensome Federal regulations have slowed efforts to spend money efficiently,” Sen. Barrasso stressed. “The time has come to cut red tape and make significant investments in our roads and bridges, investment necessary to keep the Highway Trust Fund solvent. “

Meanwhile, Sen. Tom Carper, D-Del. – the ranking member on the EPW committee who will also be speaking at this year’s conference – believes that replacing the fuel tax with a vehicle miles traveled/road user charge is potentially the best way to keep the HTF solvent.

“We have a huge demand for infrastructure needs – but what we don’t have is the will to pay for them,” he explained during a July 11 hearing last year.

“Historically, we’ve used user fees – in this case fuel taxes – to pay for infrastructure projects, especially with respect to highways and bridges,” Sen. Carper stressed. “But it [the federal fuel tax] has not changed in 25 years and it is worth half of what it used to be. Long term, we need to move to a VMT approach.”

Both senators will be joined by several other transportation industry notables at the AASHTO 2019 Washington Briefing, including:

Registration for the 2019 Washington Briefing can be conducted by clicking here.