Multimodal Focus Encouraged in Order to Stamp Out Human Trafficking 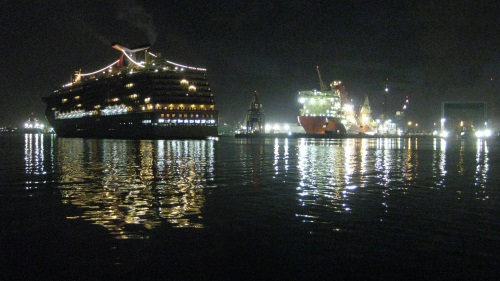 State departments of transportation are viewed as one of many “modal connectors” within the United States that can help reduce if not stop altogether the global crime of human trafficking, noted Paul Anderson, president and CEO of the Port of Tampa Bay, in a Jan. 23 webinar sponsored by the American Association of Port Authorities.

[Above photo by the Port of Tampa Bay.]

“This is something we can do if we work together,” explained Anderson, who is also one of 15 members serving on the U.S. Department of Transportation’s advisory committee on human trafficking established last October.

“I can’t speak for all state DOTs but there is certainly a high level of [human trafficking] awareness in my state of Florida,” he said. “We passed a lot of statutes driving awareness training for DMV [Department of Motor Vehicle] employees as well as with airport workers. Those efforts have to align with federal and state policies and we’re fortunate that our attorney general took a very proactive role in doing so within our state and nationally. We have the structure now [to fight trafficking] with key constituency and stakeholders.”

Julie Abraham, director of the USDOT’s office of international transportation and trade, noted during the webinar that as many as 24.9 million people across the globe are held against their will, enduring forced labor or involuntary prostitution.

“At USDOT we are fully committed to working with transportation and other important stakeholders domestically and internationally to stop this crime for combating it is a multimodal activity,” she stressed. “Whether it occurs on a ship, plane, truck, or train – whenever and wherever it [human trafficking] occurs – it diminishes our sector as a whole.”

Abraham added that federal agencies such as the Federal Transit Administration are planning to use grant opportunities to combat human trafficking, with two FTA grants planned to help train transit workers to identify and interdict human trafficking.

She also noted that the USDOT advisory committee plans to hold two public meetings this spring – on March 12 and May 16 – as it prepares to submit a list of anti-human trafficking recommendations to Transportation Secretary Elaine Chao by July 23.

In turn, Chao is required by statute to submit a report to Congress on Jan. 1, 2020, Abraham noted.

State DOTs are continuing to ramp up their efforts to fight this particular crime. Leslie Richards, secretary of the Pennsylvania Department of Transportation, noted in a statement on Jan. 7 that her agency is working jointly with other state agencies to stop human trafficking.

Melinda McGrath, executive director of the Mississippi Department of Transportation, noted in a statement on Jan. 11 that her agency has coordinated with Gov. Phil Bryant’s Human Trafficking Task Force for the last three years so all MDOT Enforcement Officers are trained on how to identify and police human trafficking on state highways and at weigh stations.

“MDOT’s Office of Enforcement is combating this terrible crime year-round,” she said, adding that the National Human Trafficking Resource Center reported 24 cases of some form of human trafficking in Mississippi in 2017 out of 4,460 cases reported that year in the United States as a whole.

“MDOT’s officers are trained to know what to look for and how to help victims when found,” McGrath said.