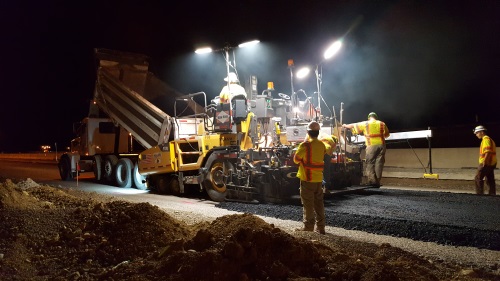 An executive order issued by Ohio Governor Mike DeWine (D) on Jan. 28 created new committee to examine the current conditions of the state’s roadways and recommend options for maintaining and enhancing the state’s transportation infrastructure; recommendations that are due by mid-February.

[Above photo by Ohio DOT.]

“Investing in Ohio’s transportation network is also an investment in the future of Ohio’s high-performance economy,” said Gov. DeWine in a statement. “We must ensure that our transportation system is not only safe and reliable, but that it also strengthens our economy by offering accessibility for current and new businesses.”

Dubbed the “Ohio Governor’s Advisory Committee on Transportation Infrastructure,” it is made up of 15 members from both the public and private sectors, including:

The formation of this committee is an outgrowth from the growing concern over the condition of Ohio’s road network. For example, a report released by The Road Information Program or TRIP back in June claimed that deteriorated and congested roads and bridges in Ohio costs motorists a total of $12 billion statewide annually – as much a $2,180 per driver in some urban areas – due to higher vehicle operating costs, traffic crashes, and congestion-related delays.

TRIP’s report found that 23 percent of Ohio’s major urban roads are in poor condition and 12 percent are in mediocre condition, with 7 percent of Ohio’s bridges considered “structurally deficient,” with significant deterioration to the bridge deck, supports or other major components.

“The serious and in some cases horrendous condition of transportation infrastructure warrants immediate discussion and attention at the local, state and federal levels of government,” noted Hamilton County Engineer Ted Hubbard in TRIP’s June report. “Our economy and future are directly tied to a transportation system of safe, dependable, and efficient roads and bridges.”