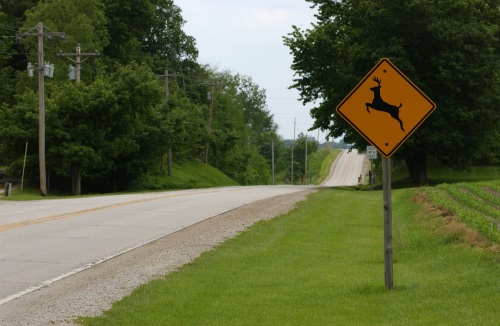 Chronic wasting disease is an highly contagious ailment fatal to both free-ranging and captive animals within the deer family, which includes elk and moose. Since its initial identification in Colorado in captive mule deer in the late 1960s, and then in free-ranging elk in the 1980s, CWD has spread to 25 U.S. states – with Wyoming, Colorado, Wisconsin, and Michigan experiencing significant deer population infection rates.

[Above photo by State Farm.]

To help combat the spread of this disease, many state departments of transportation from across the country are engaging in “cross-agency assistance” efforts to help wildlife and park service officials locate and identify potentially infected deer.

“We are still in the early stages of this, but as we frequently deal with deer as roadkill, we felt there would be a way to help them [MDWFP] with their sampling effort,” explained James Williams, Mississippi DOT’s chief engineer, in a phone interview with the AASHTO Journal.

[CWD is caused by misfolded brain proteins called “prions.” Prions are able to survive in infected animals, soil, vegetation and water. Deer contract the disease by eating infected food, drinking infected water or coming into contact with infected animals. The video below provides more detail on this ailment.]

As “front line” employees, Mississippi DOT maintenance workers are often responsible for removing road kill from highways and rights-of-way, and since they monitor the highways daily, they are in a “unique position” to assist MDWFP identify deer locations and more efficiently gather CWD data, according to Commissioner Dick Hall, chair of the Mississippi Transportation Commission, in a statement.

In fact, according to MDWFP officials, road kill is the “second best” sample source after sick deer observed in the environment, with samples from hunted deer the next best source.

To assist MDWFP, Mississippi DOT workers move road kill to the edge of the right-of-way and record the GPS location. After wildlife agents take a sample, the deer is left in place to prevent any potential transmission. MDWFP has also established drop off locations throughout the state which allow hunters to submit deer for sampling.

“We have 3,500 reported deer strikes statewide per year, with most occurring during their breeding season, which runs from November through January,” said Mississippi DOT’s Williams – a 27-year veteran with the agency. “It costs us basically nothing to support them and it only took a little bit of coordination to get this program going.”

He added that getting “buy in” from his maintenance teams to help with this program proved easy. “It is a cultural thing; we are a rural state and most of us grew up loving the outdoors. We want that love of the outdoors to continue, so anything we can do as conservationists, we’ll do. Most of our maintenance guys love to hunt, too, so we tout this as a way we can give back and help preserve the natural environment we all enjoy.”

Yet Williams also noted that his work establishing this CWD sampling plan with MDWFP also reinforced the need for his maintenance teams to use protective gear when handling road kill at all times.

As we talked [to MDWFP] about CWD I got concerned for the safety of our maintenance employees dealing with road kill. The old adage that an ounce of prevention is worth a pound of cure applies here,” he stressed. “So it provided us with an opportunity to reinforce safe deer handling practices as [the crews] won’t know if handling a disease-ridden deer or not. So we’ve formally told our guys to wear gloves any time they handle roadkill, but especially deer. It is essentially good practice anyway due to the possible presence of other bacteria, etc.”

“While the number of cases are few and geographically diverse, [we are] in being proactive to locate potential CWD cases,” noted Commissioner Mike Tagert for the Northern Transportation District of the MTC. “By working together, we can better understand CWD, its effects and how it spreads in the environment.”