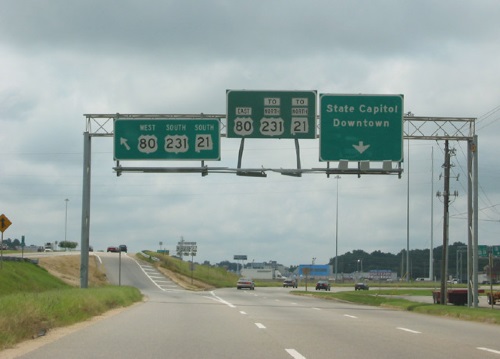 A 66-page report issued by the Alabama Department of Transportation in late January is being viewed as a tool for mapping out the state’s infrastructure needs for the next 20 years – especially in terms of determining capacity needs and how to generate the funds to build it.

[Above photo by AARoads.]

“Infrastructure demand for the next 20 years is expected to focus on well-constructed and maintained roads and bridges with sufficient capacity and consideration for safety to enable efficient freight and passenger movement across the state,” the report noted.

“In survey after survey, the adequacy of a state’s transportation system consistently ranks as one of the top three items companies assess when making business relocation or expansion decisions. And, for families, the transportation system provides a path to jobs, healthcare, education, community, tourism, and a number of other services,” it noted. “Our economy relies on a functioning, efficient transportation system to prosper and grow.”

However, the report noted that the number of registered vehicles and vehicle miles traveled are increasing at a more rapid rate than the system has been adding capacity to accommodate them. From 1990 to 2015 the number of lane-miles increased 14 percent while Alabama’s population increased 20 percent. At the same time, registered vehicles increased 46 percent while vehicle miles traveled increased 57 percent – all while transportation funding has declined.

“Alabama’s methods of paying for transportation infrastructure have lost and continue to lose purchasing power due to inflation, increasing fuel efficiency, and fleet changes, erasing the effects of the 1992 gas tax increase,” the report stressed. “Today’s replacement cost of all the road and bridge assets is about $390 billion or about $210,000 per Alabama household. The replacement cost will be $630 billion over 10 years or $1 trillion over 20 years.”

Additional funding will also be needed to address demand for new capacity between now and 2040, the report added; ranging from $12 billion in its “minimum competitive scenario” to $16 billion in its “optimum scenario” and beyond.

To generate additional funding, the report’s “working groups” suggested that indexing the state’s motor fuels tax to inflation will be one way to ease that funding crunch.