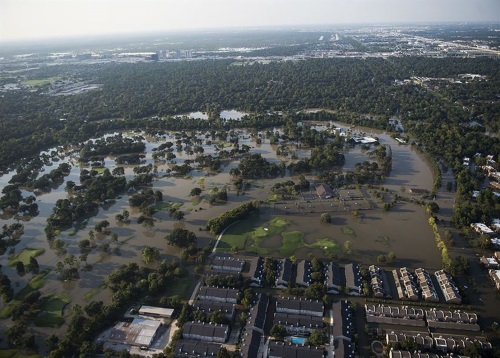 The Federal Highway Administration provided more than $705.7 million in emergency relief or ER funds on Feb. 5 to 34 states, along with American Samoa, Puerto Rico, and the U.S. Virgin Islands, to help repair roads and bridges damaged by storms, floods, and other “unexpected events” such as earthquakes.

[Above photo of Hurricane Harvey aftermath via the Department of Defense.]

More than a fifth of the total amount provided today – about $153 million – will be used to pay for repairs to damage caused by Hurricanes Harvey, Irma, and Maria, which all occurred in late 2017. Funds are also being directed towards other severe weather recovery efforts, including $12.5 million to repair California roads and bridges damaged in 2018 by a series of wildfires.

[The Caltrans video below from September 2018 illustrates both immediate damage to roadway infrastructure caused by wildfires as well as subsequent follow-on damage that can be caused by mudslides and other events due to the groundcover lost to those fires.]

ER funds worth $1.2 million are earmarked to repair US Highway 550 Red Mountain Pass in southwest Colorado, after it sustained damaged from a rock slide last year, plus $19.5 million to repair damage caused by Hurricane Michael in the Florida Panhandle region.

“These funds will help keep our country’s roads and bridges safe and well-maintained in the aftermath of the hurricanes and other severe storms seen in recent years,” noted Deputy Federal Highway Administrator Brandye Hendrickson in a statement.

FHWA’s ER program reimburses states, territories, and federal land management agencies for eligible expenses associated with damage from natural disasters or other emergency situations, the agency emphasized – helping pay for the reconstruction or replacement of damaged highways and bridges, along with costs of detours plus the replacement of guardrails or other damaged safety devices.