President Calls for ‘Infrastructure Investments’ in State of the Union Speech 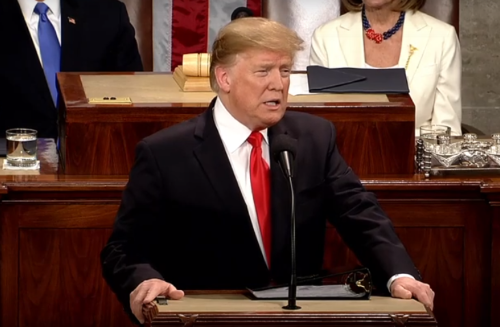 Infrastructure investments form a key part of the “agenda” President Trump (seen above) laid out in his State of the Union speech on Feb. 5.

“Many of us campaigned on the same core promises: to defend American jobs and demand fair trade for American workers; to rebuild and revitalize our nation’s infrastructure; to reduce the price of healthcare and prescription drugs; to create an immigration system that is safe, lawful, modern and secure; and to pursue a foreign policy that puts America’s interests first,” the president said in his remarks.

President Trump stressed in his speech that “both parties” should be able to unite for a “great rebuilding” of America’s infrastructure.

“I know that the Congress is eager to pass an infrastructure bill — and I am eager to work with you on legislation to deliver new and important infrastructure investment, including investments in the cutting edge industries of the future,” he said. “This is not an option. This is a necessity.”

In the infrastructure fact sheet accompanying his address, the president highlighted several statistics indicating that the country’s network of highways, roads, and bridges is in need of repair and expansion:

Though President Trump did not commit to specific infrastructure initiatives or funding levels in his State of the Union speech, Jim Tymon, executive director of the American Association of State Highway and Transportation Officials said in a statement that “transportation has long been a bipartisan concern and this year, with the administration’s support, a transportation bill can be that rare opportunity to bring members of Congress together from both sides of the aisle.”

He added that “AASHTO and its member state departments of transportation stand ready to work with the administration and Congress on a national plan to shore up the Highway Trust Fund and make the investments needed to modernize our aging transportation infrastructure.”

Illustrating the “bipartisan nature” of such investment efforts, Rep. Peter DeFazio, D-Ore., chairman of the House of Representatives Transportation and Infrastructure Committee, issued a statement wherein he agreed that “our crumbling roads, bridges, transit and rail systems, airports, and harbors impact every community across our country. We face a $1 trillion surface transportation investment gap over the next 10 years to fix the infrastructure we have, meet future needs, and restore our global competitiveness.”

Rep. DeFazio added that “I will work to build bipartisan agreement around legislation, but I can’t do it alone. This will require massive effort from the White House, stakeholders, and supporters in Congress to get something real across the finish line.”

Tom Donohue, president and CEO of the U.S. Chamber of Commerce, doubled those stakes in a speech during his organization’s annual Infrastructure Summit in Washington D.C. on Feb. 5: calling for $2 trillion in infrastructure investment over the next decade.

“The American Society of Civil Engineers projects that failing infrastructure will cost businesses $7 trillion by 2025 and destroy 2.5 million U.S. jobs,” he explained in his remarks. “Failing infrastructure impacts the bottom line of American businesses of every size, region, and industry. We can’t afford to kick the can down the road, year after year, while the physical platform of our economy crumbles under our feet. This year, we are calling on our lawmakers to take bipartisan action on a meaningful infrastructure package now.”

And, according to a new national poll conducted by Rasmussen Reports for the American Road & Transportation Builders Association and American Public Transportation Association, there is strong public support for passage of a bipartisan infrastructure measure in 2019.

Roughly 88 percent of both Republican and Democrat “likely voters,” along with 84 percent of those not aligned with either party, expressed positive support for work on a “broader, bipartisan infrastructure bill,” while 96 percent of those polled agreed “improving infrastructure like our roads, bridges, public transit, water systems and the power grid” is either “very important” (62 and 64 percent, respectively) or “somewhat important” (34 and 32 percent, respectively) to both “future U.S. economic growth” and “the quality of life of our children and grandchildren.”

“This survey demonstrates once again that public support for federal investment in traditional infrastructure programs is broad and transcends partisan politics and ideological divides,” noted Dave Bauer, ARTBA’s president and CEO, in a statement.

“People overwhelmingly support Democrats and Republicans coming together to invest in the nation’s infrastructure,” added Paul Skoutelas, APTA’s president and CEO. “Americans want to see a bipartisan bill with strong investments in public transit, and other crucial infrastructure because they know it will have wide-ranging benefits for workers, businesses, the economy, and their quality of life.”

Your Wednesday headlines are here! Get the latest in all things transportation by subscribing to the AASHTO DTU.

April 13, 1898: The Launch of a Record-Setting Great Lakes Steamship

The steamship SS Superior City was launched in the yards of her manufacturer Cleveland Ship Building Company (later renamed the American Ship Building Company) at Lorain, Ohio, specifically on the section of Lake Erie that is at the mouth of the Black River. This launch took place at two o’clock that Wednesday afternoon. The day had been declared an official holiday in Lorain, and approximately 10,000 people altogether assembled both along the river front and out on the water in rowboats to witness the launch.