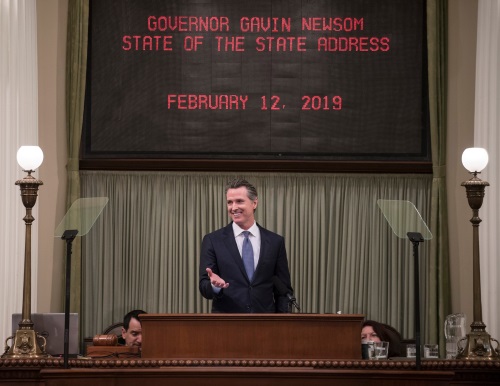 In his inaugural “State of the State” address on Feb. 12, Gov. Gavin Newsom (D) announced the state was pulling back on the scale and scope of California’s high-speed train program – abandoning plans, at least for now, to build high-speed rail routes along the coast to focus instead on finishing the already-being-built line in the state’s Central Valley, linking the cities of Merced and Bakersfield.

[Above photo via the California Governor’s Office.]

“There’s no doubt that our state’s economy and quality of life depend on improving transportation,” Gov. Newsom said in his remarks. “But let’s be real. The project, as currently planned, would cost too much and take too long. There’s been too little oversight and not enough transparency. Right now, there simply isn’t a path to get from Sacramento to San Diego, let alone from San Francisco to L.A. I wish there were.”

Yet he remained committed to finishing the high-speed rail line taking shape in California’s Central Valley.

“I know that some critics will say this is a ‘train to nowhere.’ But that’s wrong and offensive,” the governor noted. “High-speed rail is much more than a train project. It’s about economic transformation and unlocking the enormous potential of the Valley. We can align our economic and workforce development strategies, anchored by high-speed rail, and pair them with tools like opportunity zones, to form the backbone of a reinvigorated Central Valley economy.”

In short, he said that California will “continue our regional projects north and south” for high-speed rail and “finish Phase 1 environmental work” while pushing for more federal funding and private dollars.

“Abandoning high-speed rail entirely means we will have wasted billions of dollars with nothing but broken promises and lawsuits to show for it,” Gov. Newsom added. “And by the way, I am not interested in sending $3.5 billion in federal funding that was allocated to this project back to Donald Trump.”

As a result, he plans to add new “transparency measures” to California’s high-speed rail project. “We’re going to hold contractors and consultants accountable to explain how taxpayer dollars are spent – including change orders, cost overruns, even travel expenses. It’s going online, for everybody to see,” Gov. Newsom said. “You’re also going to see some governance changes, starting with my pick for the next chair of the High-Speed Rail Authority, Lenny Mendonca, my economic development director. Because, at the end of the day, transportation and economic development must go hand in hand.”