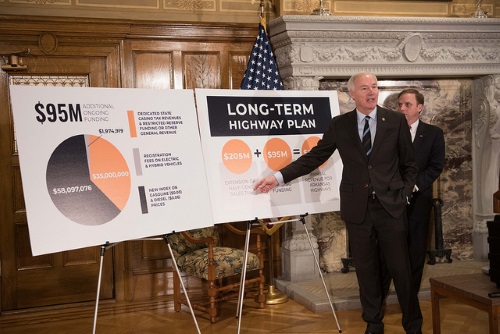 [Above photo via the Arkansas Office of the Governor.]

The second part of the plan’s funding – representing a little over $95 million – relies on three different revenue streams. The first is a three-cent and six-cent increase, respectively, in the state’s gasoline and diesel fuel taxes, which would generate a net of more than $58 million. Second, new and additional registration fees for hybrid and electric vehicles are expected to generate more than $1.97 million annually. Finally, dedicated casino tax revenues backstopped initially by monies from the state’s general fund adds in at a minimum $35 million.

Gov. Hutchinson noted during the press conference that in addition to the half-cent sales tax extension, other components of this plan – such as the registration fees on hybrid and electric vehicles and the casino tax revenues – offer “future growth potential,” meaning their “upward trajectory” would provide more “funding certainty” for Arkansas’ highway program where none previously existed.

“While the state is providing additional funding from general revenue for this plan, it is important to note that the long-term funding will come from the new revenue stream provided by the passage of the casino amendment,” he stressed. “By dedicating casino tax revenues, we are able to protect other essential services, like education, public safety, and prisons from any funding interruption.”

In addition to the $300 million those efforts will generate for state highway need, Gov. Hutchinson said Arkansas cities and counties will receive $110 million annually to help maintain local streets and roads.