Gatz Tapped to be Oklahoma DOT’s Next Director 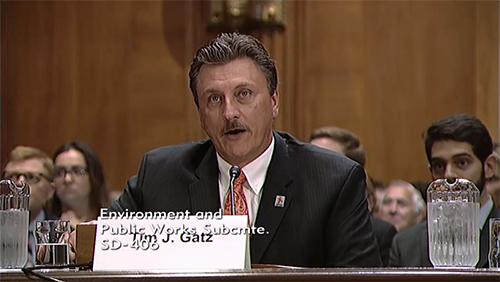 According to news reports, Tim Gatz (seen above) –who is already slated to become Oklahoma’s secretary of transportation – will become director of the Oklahoma Department of Transportation after the agency’s currency leader, Mike Patterson, retires on April 1.

The Oklahoma Transportation Commission tapped Gatz to head up the Oklahoma DOT on Feb. 12.

Gatz, who has served as the executive director of the Oklahoma Turnpike Authority since June of 2016, spent more than 20 years of his transportation career at the Oklahoma DOT, serving as the agency’s deputy director from 2013 to 2016.

He explained in a news channel interview back in January that “safe and efficient transportation infrastructure of all types supports our families, communities, and commerce” and that he “looks forward to a collaborative and innovative role working with the excellent team he [Gov. Stitt] has assembled.”

[Editor’s note: Gatz provided some insight into the value of “alternative” funding strategies for future highway when he testified before the Senate Environment and Public Works Committee in May of 2017 during an informational hearing dubbed “Leveraging Federal Funding; Innovative Solutions for Infrastructure.”]

Meanwhile, the Oklahoma DOT is expanding its work zone accident response fleet by two trucks. Originally introduced in August 2018 as part of its I-235 widening project, GO-DOT trucks assist drivers stranded in the work zone by moving them to a safe location.