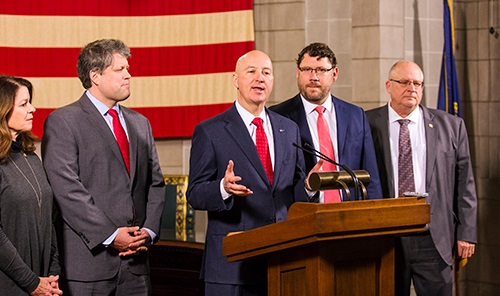 A key highway project creating an 11-mile east to west four-lane freeway south of Lincoln, NE, is getting an “expedited” construction schedule that should allow it to open in 2022 versus 2028 as originally planned.

[Above photo via Nebraska Governor’s Office.]

The 11-mile extension of the Lincoln South Beltway – which will link Highway 77 and Nebraska Highway 2 – is designed to reduce conflicts between local and through traffic, including heavy truck traffic, while improving “regional connectivity” for the movement of both people and goods, explained Nebraska Department of Transportation Director Kyle Schneweis in a statement.

“This project provides the necessary capacity to the area to allow regional travelers an alternative route around Lincoln, reducing traffic through the city,” he said. “The Lincoln South Beltway has been a project that has been well designed, discussed, and desired for many years. We are happy to be able to finally bring it to Nebraskans.”

Previously, construction was anticipated to take up to eight years to complete, but using new engineering “approaches,” the Nebraska DOT will begin construction in 2020 with traffic underway on the Lincoln South Beltway by the end of 2022.

The faster delivery of the Lincoln South Beltway is but one result of a multi-year effort by Gov. Pete Ricketts (R) to “modernize” Nebraska’s transportation system through “innovation and efficiency.” Those efforts include: