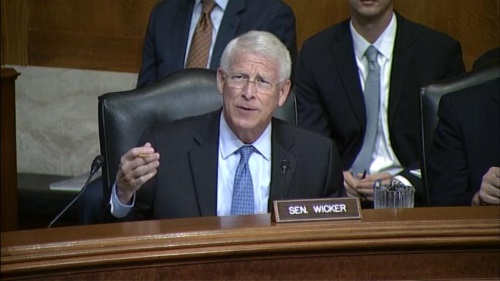 In an effort to “examine how technology, including advances in automation, artificial intelligence, and connectivity” can “revolutionize transportation and mobility,” the Senate Committee on Commerce, Science, and Transportation held an informational hearing on Feb. 13.

In his opening remarks, Sen. Roger Wicker, R-Miss., the committee’s chairman (seen above), noted that “our infrastructure system has fallen behind on what is required to maintain America’s competitiveness in a global market. Our ports are congested. Millions continue to be without access to high-speed internet [and] Americans spend eight billion hours stuck in traffic each year. These statistics mean fewer jobs, less time with family, lower economic growth, or worse.”

Sen. Wicker added that “infrastructure impacts nearly every corner of our country and economy; the corn and soybeans grown in the Midwest that are shipped through the Port of Seattle, the $323 billion in goods shipped each year to and from Colorado primarily by truck, the manufactured products moving through the port of Anchorage, the 150 million tons of freight traveling by rail through West Virginia each year, and the billions of dollars of machinery shipped to and from Mississippi each year.”

Ranking Member Sen. Maria Cantwell, D-Wash., noted in her remarks that “traffic isn’t the only problem. We know that whether that is bad roads or packed buses or not implementing PTC [positive train control] they can have tragic consequences. So what we need to do is move forward.”

She added that “bottlenecks … can lessen our nation’s competitiveness if we don’t get infrastructure right. It’s not that people who just are consumers lose their products or have to wait or that the cost is more – we lose our competitiveness to other nations who might be able to move those products faster.”

Several witnesses testifying at the hearing focused on how a falloff in funding is leading to major deficiencies in the nation’s transportation system.

“The Highway Trust Fund, the primary source of federal revenue for highway projects, safety programs and transit investments, is projected to run short of the funds necessary to maintain current spending levels by [fiscal year] 2021,” explained Chris Spear, president and CEO of the American Trucking Associations in his remarks.

“While an average of approximately $42 billion per year is expected to be collected from highway users over the next decade, nearly $60 billion will be required annually to prevent significant reductions in federal aid for critical projects and programs,” he said. “[Yet] it should be noted that a $60 billion annual average federal investment still falls well short of the resources necessary to provide the federal share of the expenditure needed to address the nation’s surface transportation safety, maintenance and capacity needs.”

Spear noted that, according to the American Society of Civil Engineers, the U.S. spends less than half of what is necessary to address these needs and – as that investment gap “continues to grow” – so too will the number of deficient bridges, miles of roads in poor condition, number of highway bottlenecks and, most critically, the number of crashes and fatalities attributable to inadequate roadways.

Ian Jefferies, president and CEO of the Association of American Railroads, said in his remarks that an increase in the fuel tax could be helpful as a “short-term bridge” to a longer-term future “that, we think, should include a vehicle miles traveled fee or a weight-distance fee.”

He said that a handful of states already impose weight-distance taxes on heavier trucks, and others are engaged in pilot programs to assess the feasibility of transitioning their state highway taxes from a per gallon-based system to a mileage-based fee.

Jefferies stressed, though, that policymakers can help improve connections between transportation modes by implementing programs that improve “first mile” and “last mile” connections where freight is handed off from one mode to another; for example, at ports from ships to railroads or from ships to trucks, or from railroads to trucks at intermodal terminals.

“These connections are highly vulnerable to disruptions, and improving them would lead to especially large increases in efficiency and fluidity and forge a stronger, more effective total transportation package,” he explained, adding that some multimodal connection infrastructure projects that are of national and regional significance in terms of freight movement could be too costly for a local government or state to fund.

“Consequently, federal funding awarded through a competitive discretionary grant process is an appropriate approach for these needs,” Jeffries stressed.

Those are also reasons why Congress needs to engage in a broader “multimodal” view of freight transportation when it comes to funding infrastructure, stressed William Friedman, president and CEO of the Cleveland-Cuyahoga County Port Authority as well as chairman of the American Association of Port Authorities.

“It’s been more than 60 years since President Eisenhower proposed and began building out the Interstate Highway System in 1956. But until the FAST [Fixing America’s Surface Transportation] Act of 2015, freight had not been fully considered or realized as a national policy priority,” he explained in his remarks.

“However, during the same 60-year period, there have been eight evolutions of the containership, starting with vessel capacities of 500 twenty-foot equivalent units, evolving to ships with capacities of 18,000 TEUs and beyond, which are as high as a New York skyscraper and as wide as a 10-lane freeway,” Friedman noted. “This means that that shipping industry has reinvested in their ships eight times while our country has relied upon essentially the same infrastructure to accommodate and facilitate an astronomical growth in freight volumes.”

“The infrastructure investments we make at ports, be it highway connectors or rail access projects, directly impact our partners in the rail and trucking industry who are with us here today,” Friedman said. “Just as important, targeted investments at maritime facilities provided a level of certainty and efficiency to a growing and interconnected supply chain.”