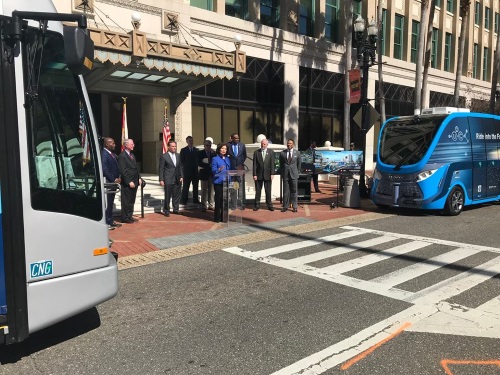 Transportation Secretary Elaine Chao officially awarded the City of Jacksonville, FL, and the Jacksonville Transportation Authority a shared $25 million grant to support two projects in a formal ceremony on Feb. 8.

[Above photo via USDOT.]

Made under the Better Utilizing Investments to Leverage Development or BUILD transportation grant program, Chao said in a statement that “this grant will pave the way for two important projects to revitalize transportation and commerce in the heart of the city.”

USDOT said that this $25 million grant will fund two separate projects. The City of Jacksonville will carry out the Urban Core Riverfront Revitalization, while the JTA will launch the Bay Street Innovation Corridor.

Those two projects will “bracket” the downtown area, according to USDOT – providing major improvements to Bay Street from the Jacksonville Regional Transportation Center at LaVilla in the Downtown Core area to the Sports Complex.

They are also examples of how a “new mobility paradigm” is reshaping transportation in the city, JTA noted in a recent video: