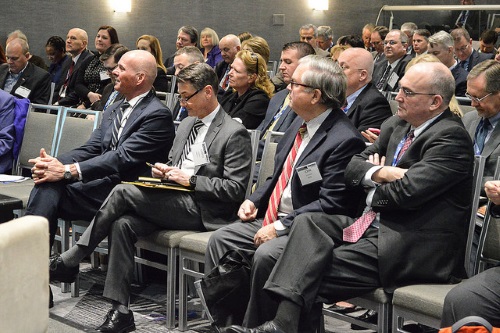 [Secretary Chao also delivered the keynote address at the 2018 Washington Briefing, noting at the time that country’s infrastructure needs had “ignited a necessary debate throughout the nation and in the Congress on our infrastructure priorities and processes as a country.”]

Rep. Peter DeFazio, D-Ore., chairman of the House of Representatives Transportation and Infrastructure Committee, will speak during the morning session on Wednesday, Feb. 27, along with Rep. Sam Graves, R-Mo., ranking member on the T&I Committee.

[A key point made by Rep. DeFazio at during the 2018 Washington Briefing is any additional transportation must flow through existing federal programs “as is” so “we don’t have to go through a one, three, or five-year debate over policy.”]

They’ll be joined by Sen. John Barrasso, R-Wyo., chairman of Senate Committee on Environment and Public Works, and Sen. Tom Carper, D-Del., the ranking member on the EPW committee.

Jim Tymon, AASHTO’s executive director, noted in a video interview ahead of this year’s event (seen below) that “once we get to 2020, you’re going to see Washington D.C. lock down pretty tight as presidential politics really comes to the forefront.”

As a result, he thinks Congress has about “seven or eight months” to try to get key pieces of legislation completed.

Many other transportation notables will be speaking at the AASHTO 2019 Washington Briefing, including:

Registration for the 2019 Washington Briefing can be conducted by clicking here.