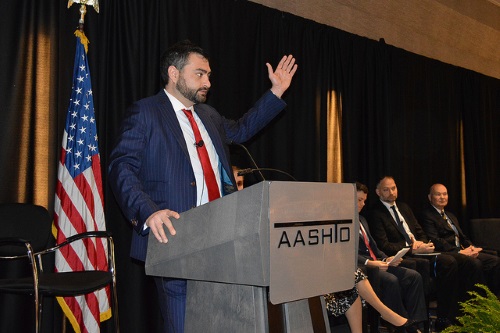 Centralizing project permit processing, preparing for autonomous vehicles, increasing freight throughput between modes, and replacing the nation’s aging bus fleets are just some of the many challenges ahead for the nation’s transportation system.

In a roundtable discussion held at the American Association of State Highway and Transportation Officials 2019 Washington Briefing on Feb. 28, seven key federal agency executives examined those challenges and what they are doing to confront them.

For example, Alex Herrgott, (seen in photo above) the executive director of the Federal Permitting Improvement Steering Council, said a “nebulous and opaque” permitting system for transportation and other infrastructure projects means “we’re throwing money into a process that is not transparent and not fair. We need predictability and we need answers – that is the least we can do.”

Herrgott noted that his council – housed with the General Services Administration – was created by the Fixing America’s Surface Transportation or FAST Act of 2015 to be a “one stop shop” for the federal government to get projects permitted. By having all the different federal agencies work through his council as a “driver” of the permitting process would, by extension, reduce the cost and the time required to get projects off the ground.

“But we should not have needed a provision in FAST Act that required modes to communicate with each other,” he stressed. “We needed recognition that there has to be a driver of the process. We need to get all the federal entities in a room to talk with one another about projects; not send letters and emails. We should have been doing this years ago.”

Hergott pointed out that sometimes “a shovel can’t be put in the ground” until three or four years after a project is announced due to all the permitting requirements.

Brandye Hendrickson, deputy administrator of the Federal Highway Administration, echoed that sentiment, noting that “there is a lot of bipartisan support for strengthening our infrastructure” as well as continued support for lessening the regulatory upon the states as well when it comes to transportation.

“We are steadfast in our efforts to bring regulatory reform to project delivery, promoting the philosophy of One Federal Decision in all our projects,” she said. “We also remain focused on a lighter federal touch. That’s why we continue to look at all of our different processes; turning over every rock to ensure everything we can to reduce burden on state partners. And we will continue looking to the states to assume federal level program responsibilities.”

On the subject of autonomous vehicles, Brian Barnard – director of government affairs for the National Highway Traffic Safety Administration – noted that trying to encourage innovation while ensuring safe deployment of new technologies remains a challenge.

“For such technology to save lives, the public must be able to use them and trust that they will work,” he said, adding that his agency is already involved in establishing a pilot program to study the impact of vehicle automation.

“Many of you are wondering what a sailor is doing here speaking in front of all of you. It’s because I’m bringing you a hell of a lot more business,” he said. “Our ports, which I care a lot about, connect to your highways, which you care a lot about, and railroads.”

Buzby noted that cargo ships capable of carrying 14,000 freight containers are now becoming “the norm” in the ocean freight world. “And all of that flows out of ports and must flow across your highways – that’s why those connections are becoming more critical, because demand is happening at a very high pace,” he said. “So my office at Maritime is looking at how we can make those connections better.”

Buzby added that there is “real ability” of such burgeoning freight demand to create “significant bottlenecks,” tying up the nation’s road and rail system. By extension, that means other surface transportation avenues for cargo should be encouraged.

“We can relieve stress on highways and railways by using ‘blue highway’ inland waterway system,” he pointed out.

“There is a huge shift in the Millennial population to short-distance corridors, with growth in the south and mountain west where we don’t have assets,” he said. “So much growth is now occurring in regions outside where we have rail assets. So we’re looking at a very strained surface system, at the places where the population is going and congestion is growing and likely to increase.”

He said that “mismatch” between regional growth and demand for transportation service is going to drive Amtrak’s recapitalization strategy as well. “We need to think through what transportation America needs for the next generation; what will we be recapitalizing for? Part of that is also how deal with our aging infrastructure; we’ll need $40 billion over next 20 years to replace it.”

“Buses, for example; they are really the workhorses of transit – the most widely used form of transit. And they are aging,” she said.