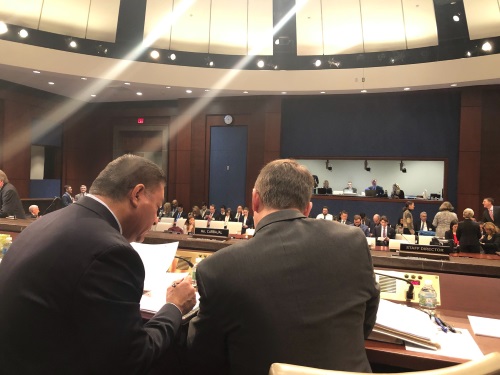 An information hearing held by the House of Representatives Transportation and Infrastructure Committee on Feb. 26 examined how changes to infrastructure policy could help the U.S. transportation system “mitigate and adapt to climate change.”

[Above photo via House T&I Committee.]

Committee Vice Chair Salud Carbajal, R-Calif., led the four-hour hearing and presented prepared remarks on behalf of Committee Chairman Peter DeFazio, D-Ore., who found himself stuck in Oregon due to a heavy snowstorm.

“This is the latest evidence that climate change increases extreme weather events and those events negatively affect our transportation system,” Rep. Carbajal said, reading from Rep. DeFazio’s prepared remarks; a reference to the blizzard that caused Rep. DeFazio to miss the hearing.

While he noted that “many members on both sides of the aisle” want to “spar” over the Green New Deal and its transportation components, Rep. Carbajal said on behalf of Rep. DeFazio that “this is not the venue. The authors of the Green New Deal set an ambitious goal, one which I support, but their plan encompasses issues far beyond the jurisdiction of this committee; in fact, it was referred to eleven committees, and the resolution provides no details. Rather than debate this resolution, our job to is find pragmatic approaches to addresses the challenges of our changing climate.”

Ranking Member Rep. Sam Graves, R-Mo., agreed with part of that assessment, saying in his prepared remarks that “we can all agree that we want clean air and clean water for our communities and that we have to be prepared for the challenges posed by a sometimes harsh environment. I also know that we need to work together to find solutions that actually work.”

But he also criticized the Green New Deal as a “fairy tale” in terms of its efforts to “completely make over our transportation network,” noting that its proposal to replace commercial aviation with high-speed rail would “put 11 million people with aviation-related jobs out of work. Those are some of the real consequences of pursuing the goals of this fantasy proposal. That’s just one example of the Green New Deal’s goals and the trillions of dollars it would likely cost.”

Nine presenters were split among two panels at the hearing provided testimony on a range of possible options for synching infrastructure policy more firmly with climate change needs.

Daniel Sperling, a member for the California Air Resources Board, touched on several initiatives in his state, such as the establishment of a low carbon fuel standard, carbon cap and trade program to control emission levels, and the Sustainable Communities Program, which sets targets for metropolitan areas to reduce greenhouse gas emissions from passenger transportation.

“California has demonstrated that one can invest in clean energy, efficient buildings, and sustainable transportation, to gain a healthy environment while also growing the economy,” he said in his prepared remarks. “Since 2010, California’s economy, per-capita income and the size of the private workforce have all grown significantly faster than the national average, while at the same time reducing its carbon emissions back to the level they were at in 1990.”

Kevin DeGood, director of infrastructure policy for the Center for American Progress, noted that “safeguarding the environmental review process” is another key element.

DeGood added that when it comes to both mitigation and adaptation, Congress “should recognize the valuable resiliency services” that natural systems provide.

“Focusing federal resources exclusively on man-made facilities misses the ability of natural systems to reduce storm surge, wildfires, flooding and mudslides,” he said. “In many cases, investing a federal dollar in protecting and managing natural habitats will provide larger resiliency dividends than spending that same dollar on hardening man-made infrastructure.”