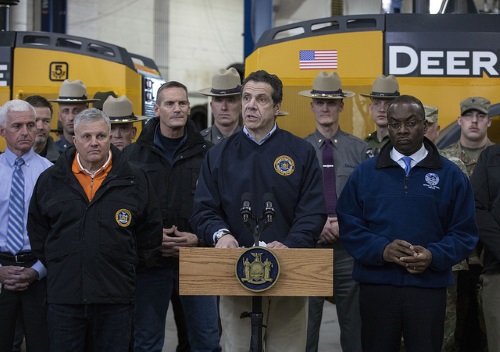 Gov. Andrew Cuomo (D) (seen above) and New York City Mayor Bill de Blasio (D) announced a plan on Feb. 26 to reorganize the Metropolitan Transportation Authority, which oversees mass transit in the Big Apple, while implementing congestion pricing for the city as well – all in an effort to increase funding for the agency.

[Above photo by Mike Groll/Office of Gov. Cuomo.]

The MTA restructuring plan – expected to be completed by June – will “consolidate and streamline all common functions” such as construction management, legal, engineering, procurement, human resources, advertising, etc., among the agency’s six operating entities into one central operation.

To provide a capital improvement fund for the MTA, the reorganization plan includes establishing congestion pricing via electronic tolling devices that would be installed on the perimeter of the Central Business District defined as streets south of 61st street in Manhattan.

The governor and mayor said in a joint statement that congestion pricing tolls would be supplemented with state and city revenue and a new internet sales tax derived in New York City, along with a percentage of marijuana excise tax revenue.

The funds accumulated from all three would then be placed in a “lockbox” for MTA capital investments in the subway system, new signaling, new subway cars, track and car repair, accessibility, buses and bus system improvements, plus “expanding transit availability to areas in the outer boroughs that have limited mass transit options.”

In addition, the proposal would mandate that any motorists who endanger highway workers with an unauthorized intrusion into an active work zone would be subject to a term of up to three months in jail and a fine of up to $500.

“New York has zero tolerance for anyone who flagrantly puts the lives and safety of transportation workers in jeopardy,” Gov. Cuomo said in a statement. “By strengthening existing penalties and expanding the categories of workers included in these protections, we will prevent future assaults, ensure the safety of New York’s transportation workers and provide law enforcement the tools they need to hold offenders accountable.”

Gov. Cuomo noted that the New York State DOT has been testing over-height vehicle detection technologies along parkways in the Hudson Valley, Long Island, New York City and Syracuse to reduce bridge strike incidents. According to the agency’s latest figures, there have been 576 bridge strikes on New York State highways since 2015, causing injuries, traffic delays and damage to bridges and highway infrastructure.