Sen. Wicker: ‘Don’t Know if We Have Made the Sale Yet’ on Infrastructure 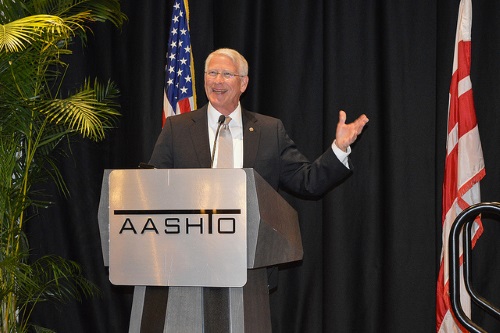 There is an infrastructure problem, if not a crisis, in the United States, but public opinion may not yet be in a position to back funding measures to solve it.

That was the message Sen. Roger Wicker, R-Miss., chairman of the Senate Committee on Commerce, Science, and Transportation, shared at the American Association of State Highway and Transportation Officials 2019 Washington Briefing on Feb. 28.

“I would love to see an infrastructure bill passed but the sad truth is … it costs money to build infrastructure,” Sen. Wicker explained as the keynote speaker for a joint luncheon sponsored by AASHTO and The Road Gang at the Washington Briefing.

“I just don’t know if we are getting that point across well enough,” he said. “I don’t know if we have made the sale yet with the general public – though we may be closer than ever to making that sale.”

Sen. Wicker added that his “hat’s off to you in the states” that are paying for infrastructure via fuel tax increases and other methods, recalling that in 1987 Mississippi passed a 5-cent-per-gallon gas tax increase and that “no legislators that I can recall lost an election over that.”

He said that “we have to invest in our assets” but emphasized that “he doesn’t know” if using public private partnerships or P3s “is a winner in the heartland” of the United States.

Sen. Wicker also noted that Sen. Mitch McConnell, R-Ky., the Senate’s majority leader, is “determined” to bring the Green New Deal to a vote and to do it soon.

“I am loathe to have a showboat [vote] but this is going to be a showboat,” he said. “But we have to take it seriously because so many potential presidential [candidates] in the Democratic party have endorsed it. And it would amount to a complete overhaul of the U.S. transportation system – it would move us to 100 percent electric vehicles very quickly and replace air travel with high speed rail, though there is no discussion how that would impact freight. And it’s going to cost between $51 trillion and $93 trillion … One California representative told me, ‘it’s not about cost; it is about change.’ But at some point has to be about cost. So we will get everyone on the record about it.”

Sen. Wicker also touched on what he sees as a need to promote the development of 5G communications technology, especially as it may be key to the successful deployment of autonomous vehicles.