Study Finds ‘Growth’ Can Cause Transportation Troubles for Diverse Groups 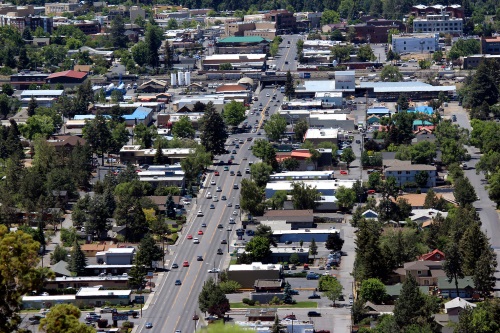 A 30-page report crafted from a year-long population survey of Bend, Ore., found that its residents shared a similar view of transportation issues resulting from city growth despite different backgrounds, income levels, and ages. Those findings – released in mid-February – also reflect trends occurring at the national level.

[Above photo of Bend, Ore., via Wikimedia Commons.]

While Hubbell Communications – the Portland, Ore.-based public relations firm that crafted the study – said it is “not a report that contains recommendations on specific policy or economic development solutions,” the company stressed that its survey “captures the sentiment on values, feelings and priorities” in order to help business leaders, policymakers and civic influencers focus debate on “actionable solutions” to problems created by economic growth; especially transportation issues.

“Throughout the last 20 years, population demographics have shifted [in Bend, Ore.] as higher-earning households formed, ideological perspectives moved leftward, a new kind of cultural dynamic built around outdoor recreational activity and environmental quality became the writ norm,” Hubbell said. “This contrast created a growing sense of division between a once rural, working-class timber town morphing into a haven for tourists and wealthy urbanites.”

According to the firm’s research, affordability (37 percent), better paying jobs (19 percent), and congestion (18 percent) rank as a shared set of priorities across all demographic groups in Bend. But by far the biggest concern about growth within the community as a whole (74 percent) was traffic congestion.

“It’s interesting to observe that when growth manifests itself through a daily behavior like driving or commuting, it catapults those problems ahead of important issues like affordability and economic opportunities such as job creation, wages, cost of living,” Hubbell noted.

“When asked about the negative impacts Bend’s tourism economy has on the region, the majority (55 percent) feel it increases traffic congestion and makes commuting more difficult,” the firm said. “This sentiment was most felt among 55 and over populations (64 percent), Republicans (68 percent), and unemployed residents (64 percent).”

Those findings suggest there are “passionate viewpoints” about transportation among retired residents – a finding reflected on the national level in a survey conducted by the National Aging and Disability Transportation Center last December.

“This raises an interesting opportunity for how we talk about growth and its implications for residents,” Hubbell said. “We found speaking to how certain growth-related activities like tourism helps the community invest in roads and infrastructure creates a shift in sentiment. If we told participants in our survey that millions of dollars of local tourism taxes go toward roads and infrastructure maintenance – which they do – 70 percent said they felt more positive about promoting tourism in general.”

In the end, Hubbell’s researchers said that, looking at the bigger picture, “transportation likely rises to the top of public priorities because it’s widely experienced by most everyone in the community. This also gets to an underlying issue that permeates the larger conversation about growth: livability.”