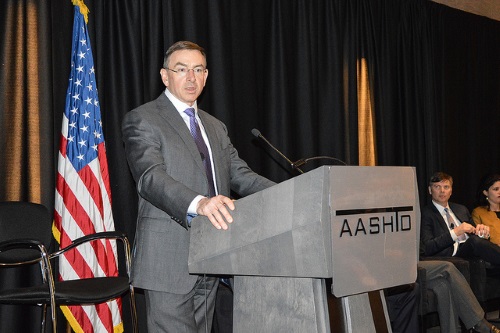 Revitalizing transportation infrastructure in the United States will require a “united” effort on the part of both government and the general public – with eyes wide open about the costs associated with such a massive revitalization effort.

That’s the view of several key transportation association executives, expressed during a roundtable session at the American Association of State Highway and Transportation Officials 2019 Washington Briefing on Feb. 28.

“It’s easy to talk about it, but hard to start advancing bills,” Dave Bauer, president and CEO of the American Road and Transportation Builders Association, (seen in photo above) explained in regards to passing infrastructure funding legislation.

“We are eager for this discussion to begin and we are trying to impose a degree of motivation on elected officials” to get an infrastructure funding measure passed, he added.

Part of that “solution” is building more general public support for increased funding, he emphasized, and a key to that is talking about the “end result” of transportation infrastructure investments.

“There is very little discussion about what we’re getting in return [from transportation funding]. Hard thing to do when talking about calling for revenue increases. That’s where we are falling short,” Bauer explained. “We need to celebrate the outcome of projects. We’re doing more than just laying concrete; we’re supporting the economy and enhancing quality of life. “

“The cost of transportation infrastructure today is enormous; it costs a lot of money and it takes a partnership to build it,” he said. “A grand opportunity is before us if we can come together as one unified voice – we all want more investment in transportation infrastructure to keep the country competitive and provide quality life improvements for our communities.”

Matt Chase, executive director and CEO of the National Association of Counties, added that “changing the narrative” on fuel tax increases is a key part of that process.

“We need to remind folks that the last time we increased the federal gas tax, the minimum wage was $4 an hour. It used to cost $300,000 per mile to build a road; now it’s $1 million per mile,” he said. “Yet I spend more on my subscription to Netflix every year than on state and federal gas taxes. So we need to get outside the Beltway and tell this story to the voter; that if they spend money on a gas tax increase, they’ll get a good return for it. We can’t take it for granted.”

Anne Ferro, president of the American Association of Motor Vehicle Administrators, and Corinne Kisner, executive director of the National Association of City Transportation Officials, touched on how safety needs to be incorporated into that infrastructure discussions.

“Fundamentally, transportation about quality of life – getting where we need to go safely, affordably, in a reasonable amount of time, and then getting home in one piece,” Kisner stressed. “That is about how we allocate space on our streets. We need new designs to encourage slower vehicle speeds, better tools to determine the appropriate speed limits for streets, and encourage more use of mass transit, walking, and biking. And we see a real opportunity to collaborate with state partners there.”

Ferro indicated that the deployment of autonomous vehicles is one future development that will help improve roadway safety.

“To really to get to the ‘road to zero’ goal of zero fatalities by 2050, moving the driver out of the equation is key,” she explained. “Our state agencies come into that space; they help facilitate a discussion about the testing and deployment of autonomous vehicle standards.”