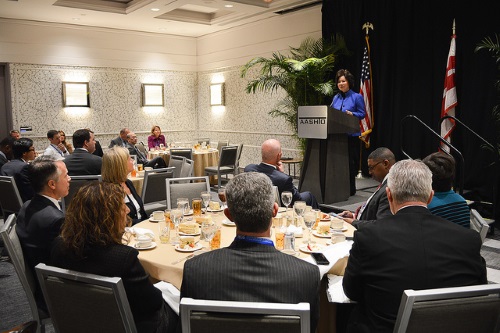 Making infrastructure construction more productive by cutting “red tape” at the federal level remains one of the U.S. Department of Transportation’s overarching goals, according to Transportation Secretary Elaine Chao.

During the keynote address at the American Association of State Highway and Transportation Officials 2019 Washington Briefing on Feb. 27, Chao referenced a 2017 McKinsey study that found the construction industry has an “intractable productivity problem” that she said is exacerbated by excessive federal regulations.

“Money aside, as important as that is, the department is striving to make structural changes – streamlining the permit process so projects can be delivered more quickly while protecting the environment and maintaining safety standards,” she explained.

“The goal here is to make every dollar invested in infrastructure to go further without compromising outcomes. The McKinsey analysis said construction productivity has been flat for 30 years – and clearly too many [transportation] projects are over budget and behind schedule due in part to federal red tape. Project delays and cost overruns have a real negative impact; you all know that.”

Sec. Chao also stressed that America’s transportation networks “are central to our local and state economies and the national economy as well; the effects of the state of our infrastructure is incalculable in terms of the quality of life to our citizens,” going on to note that “infrastructure is among the top two or three policy matters that leaders of both parties are supporting with a bipartisan approach.”

Her full remarks can be viewed in the video below: