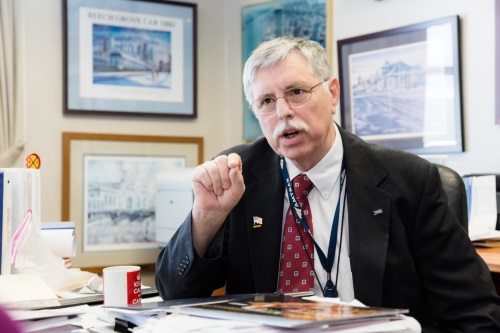 Joe Boardman (seen above), the longest-serving Commissioner of the New York State Department of Transportation and second-longest serving president and CEO of Amtrak, passed away March 6 at age 70 from a stroke while on vacation in Florida with his family. He is survived by his wife Joanne and their three children.

Boardman, a lifelong resident of New York and the second of eight children born and raised on a dairy farm, spent more than 40 years in the transportation industry.

A U.S. Air Force veteran who served in Vietnam from 1968 to 1969, Boardman became commissioner of NYSDOT in 1997 and held that position until 2005, when he became administrator of the Federal Railroad Administration. Following his stint at the FRA, Amtrak’s board of directors initially appointed him to serve a one-year term as its president and CEO starting in November 2008, but by January 2010, Amtrak extended Boardman’s appointment “indefinitely.” He ultimately retired as Amtrak’s chief executive in September 2016.

“We are deeply saddened to learn of the passing of Joe Boardman,” noted Amtrak Chair Tony Coscia and President and CEO Richard Anderson in a joint statement.

“He was a tireless advocate for passenger rail and the nation’s mobility,” they said. “During his eight years at the helm [of Amtrak] Joe helped the company make significant progress in reducing our debt, improving our infrastructure and raising our cost recovery performance. He leaves a lasting legacy that includes public service and making passenger rail transportation better for millions of people.”

“During his more than 40 years in the industry, Joe Boardman’s work was more than just improving transportation; it was grounded in a mission to bring people together,” noted Ian Jefferies, president and CEO of the Association of American Railroads, in a statement. “I am deeply saddened by the news of his passing and would like to extend my sympathies to his wife Joanne and the rest of the Boardman family.”