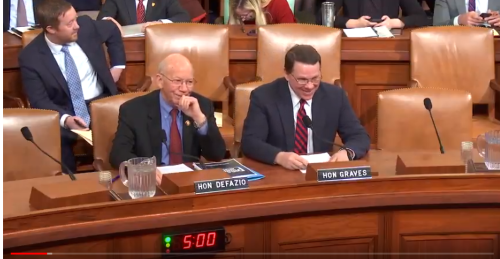 A hike in federal fuel taxes, more private sector financing, plus continued reduction in “red tape” are just some of the solutions being touted to beef up surface transportation funding now and in the future – with support growing for changing over to a vehicle miles traveled or VMT fee in lieu of fuel taxes down the road.

[Pictured above: Rep. Peter DeFazio (at left) and Rep. Sam Graves (at right)]

“We need real, sustainable federal investment to shore up our nation’s infrastructure and we need it now; there is no sugar-coating the situation,” Peter DeFazio, D-Ore., chairman of the House of Representatives Committee on Transportation and Infrastructure, in prepared remarks at a hearing held by the House Ways and Means Committee on March 6.

“In order for our committee to do its work, particularly when it comes to surface transportation, we need the Committee on Ways and Means to act to raise federal revenue. There is no way around this reality,” Rep. DeFazio stressed. “We cannot limp along on short-term patches, leveraging, or shifting responsibilities to other levels of government. It is time for Congress to step up and do its part. And that means, as part of any infrastructure package we consider, we have to provide real revenue for our surface transportation network to shore up the Highway Trust Fund.”

“The President campaigned on a massive infrastructure package, and he mentioned it again in this year’s State of the Union address. I’ve spoken with [Treasury] Secretary [Steve] Mnuchin and [Transportation] Secretary [Elaine] Chao, and both have assured me that we have willing partners in the administration,” noted Rep. Richard Neal, D-Mass., chair of the Ways and Means Committee in his opening statement. “So I think we have a real opportunity to work together and do something big here.”

Yet Rep. DeFazio pointed out that, according to the Congressional Budget Office, from 2003 to 2017 there has been a nearly 20 percent decrease in federal spending, adjusted for inflation, on transportation and water infrastructure. “This lack of federal investment has contributed to a massive backlog of infrastructure needs,” he said. “According to the U.S. Department of Transportation, we have an $836 billion backlog of unmet capital investment needs for highways and bridges and a $90 billion backlog of transit capital investment needs.”

While Rep. DeFazio said that “financing solutions for infrastructure have merit,” he emphasized that it does not actually increase Federal revenue.

That’s why Thomas Donohue, president and CEO of the U.S. Chamber of Commerce, emphasized the need to raise the federal fuel tax – reiterating his organization’s call for a 25-cent-per-gallon increase in the federal tax on diesel and gasoline to be phased in over five years and indexed to inflation as well as adjusted for future increases in vehicle fuel economy.

“[This] user fee was last raised in 1993. Since then, inflation has eroded over 40 percent of the value of the fee,” he explained in his testimony. “In addition, vehicles are significantly more fuel-efficient than they were 25 years ago. As a result, motorists use less fuel to drive the same number of miles, and there is significantly less revenue to maintain the roads upon which they drive.”

Donohue noted that additional 25-cents-per-gallon would raise $394 billion over the next 10 years, which would then be invested in highways, bridges, and transit systems.

He added that, concurrently with that tax increase, federal infrastructure loan programs should be expanded. “Infrastructure equity bonds raised about $350 billion and since equity is about 25 percent of a typical public-private partnership or P3, that $350 billion could support projects worth $1.4 trillion,” he noted.

“To make it easier and more attractive for the private sector to participate in infrastructure projects, we should strengthen and expand federal loan programs – such as TIFIA and RRIF loans, private activity bonds, grants, and other mechanisms – to facilitate more P3s,” Donohue added. “The Chamber believes all levels of government need to stop thinking about infrastructure investment as one big payment made up front and all at once.”

Finally, he said his organization believes that all federal infrastructure approvals should be completed within two years, which will help reduce their cost. “State and local projects benefiting from federal funding or financing should also adhere to a two-year timeline, which should run concurrent to the federal process,” he noted.

In the future, Marc Scribner, a senior fellow with the Competitive Enterprise Institute, suggested to the committee in his testimony that that as “fuel consumption is becoming an increasingly poor proxy for highway use,” a VMT fee should be considered as a replacement for the federal fuel tax.

“Looking toward the long-run where motor fuel tax increases would be both ineffective in raising revenue and highly regressive, a number of states in recent years have been piloting new mileage-based revenue collection technologies and practices, which are variously known as mileage-based user fees, road usage charges, and VMT taxes,” he said. “All refer to the same approach where users are directly charged based on the distances – and perhaps weight of the vehicle – they drive, which is as close to optimal road charging that current technology permits.”

Rep. Sam Graves, R-Mo., ranking member of the House T&I committee, noted in his testimony that a “VMT has the potential to be a true user [fee] that captures everyone and gets the Highway Trust Fund back to where it needs to be. However, like any real solution, there are challenges. For instance, privacy is a big concern and there are questions about whether or not a VMT is fair to both rural and urban drivers.”

Yet, despite those issues, a VMT offers a better long-term funding solution compared to the federal fuel tax, he said.

“To be frank, the gas tax is not a long-term solution; it will only get worse as the car, bus, and truck fleet become more fuel efficient and hybrids and electric vehicles become more popular,” noted Rep. Graves.

Rep. DeFazio expressed support for the VMT concept, albeit with some caveats. “A VMT must be tested at the national level first, which I support, before it can be considered a viable federal user fee,” he said. “Finally, we need to apply a user fee to electric vehicles, and a VMT fee does this efficiently while retaining the user fee model.”