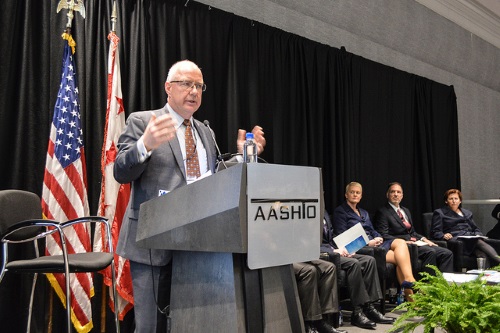 One of the biggest challenges in the future facing state departments of transportation when it comes to the broader deployment of connect and autonomous vehicles or CAVs is how to integrate them and their needs with the non-CAV population.

“The challenge for state DOTs is to have a plan for a [transportation] system that can manage new autonomous vehicles operating alongside a 1965 pickup truck,” she said. “We have seen a lot of states get out in front with legislation only to go back and make changes to it. Handling the deployment of CAVs and developing the public policy that guides them is the hard part.”

Kirk Steudle, vice president of transportation for Econolite and a former director of the Michigan DOT who moderated the discussion, echoed Cohan’s point about the public policy difficulties.

Laurie Berman, director of Caltrans, noted that one result of her agency’s focus on “keeping one foot in today, managing the current system, while incorporating the needs of future technology” is the use of a new striping material for California’s roadways.

“It benefits today’s users because at night it offers better reflectivity,” she said. “But that works for autonomous vehicles, as well, so they can ‘see’ the road markings better.”

Russell McMurry, commissioner of the Georgia DOT, agreed with Caltrans’ Berman, noting that getting “back to the basics, with good signs, good stripes, and no potholes” benefits CAVs and non-CAVs alike. But there are other technologies involved with CAVs that state DOTs need to incorporate as well, such as dedicated short range communications or DSRC that allow CAVs to tap into traffic signal data, among other information.

“Don’t get stuck in ‘paralysis by analysis’ because there are so many technology forks in the road” CAVs may follow, McMurry stressed. “To me, it’s about how we can be ‘technology agnostic’ about our future with CAVs. From our perspective, we need to be ready for anything.”

And the amount of data generated by CAVs is another challenge state DOTs need to prepare themselves for, said Tim Weisenberger, project manager/technical programs for SAE International. “We’re talking about whole terabytes of data here. How will you be able to just find what you need? It is a tremendous challenge” where CAVs are concerned, he explained.

Ed Bradley, program manager for Toyota, added that not only will there be “so many facets to CAV technology” that state DOTs will need to be thinking about, but how to help everyday motorists be accepting of them.

“There will need to be significant consumer education and acceptance [of CAVs] before we start building them in greater numbers; they need to be aware of their capabilities and liabilities,” he emphasized. “They will have to work for everyone in all conditions, all of the time.”

As to when “greater numbers” of CAVs will appear on U.S. roads, Bradley noted that it won’t be anytime soon.

“I don’t have an answer on a timeline; some say a decade, others two decades,” he said. “We envision higher levels of automation will deploy first in smaller fleets in certain domains.”