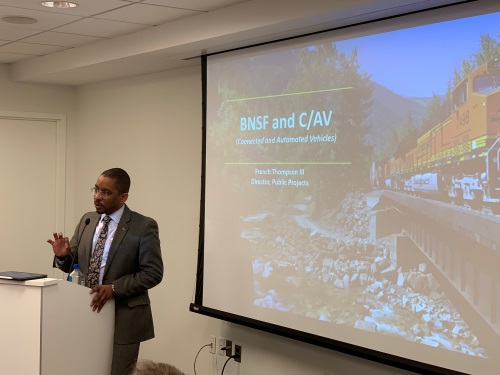 New principles may be needed to guide the “interaction” between connected and autonomous vehicles or CAVs and railroad crossings as CAVs will require “brighter” signs and even data connections with crossing guard equipment in order to operate effectively.

Those were some of the takeaways from a panel discussion held March 6 during a two-day Second Strategic Highway Research Program (SHRP2) Railroad-DOT Mitigation Strategies (R16) product “Community of Interest” meeting hosted by the American Association of State Highway and Transportation Officials and the Federal Highway Administration in Washington, D.C.

French Thompson III, director of public projects and system design for BNSF Railway, and Brian Burkhard, global technology leader for advanced mobility systems at Jacobs Engineering, explained that the infrastructure needed to support CAVs “are not being discussed fully” and neither are the costs.

“Railroads often become a third or fourth thought down the line when it comes to infrastructure issues like this one,” BNSF’s French noted. “There’s this ‘utopian feeling’ about autonomous vehicles coming from Silicon Valley and a lot of assumptions by folks in academia in terms of what can or can’t happen with CAVs. At a bare minimum, we will need enhanced signage and striping for them.”

Jacobs’ Burkhard noted that “there is a saying: automated vehicles are only as good as they are connected. Connectivity is a failsafe means of communicating regardless of vehicle’s internal ability to recognize signage.”

Yet there are “major complexities to right-of-ways” when it comes to signal-to-vehicle system integration, such as connecting a dedicated short range communication or DSRC-enabled traffic signal to a train’s signal, so a message can be broadcast to CAVs that “crossing gates are going down so vehicles must stop.”

Jacobs’ Burkhard added that such concerns need to be addressed sooner rather than later by state DOTs as the industry will “probably start seeing commercialization of Level 4 and 5 [fully autonomous] vehicles by the early 2020s.”

He stressed that “CAVs will be here; the only question is when. So you should start thinking about them within your long-range transportation plans – modeling for the signage, striping, and traffic signal communication needs of CAVs in capital improvement plans as well.”

[Additional information on SHRP2’s R16 product, which includes information in areas such as railroads and CAVs among many others, is available by clicking here.]