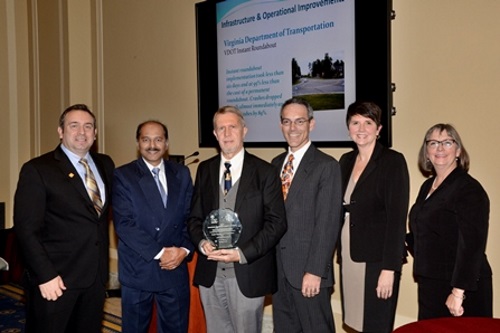 The National Roadway Safety Awards is a competition sponsored every two years by the Federal Highway Administration and the Roadway Safety Foundation to recognize transportation organizations – including state departments of transportation – that have made “verifiable and significant strides” toward improving the safety of our nation’s highways through infrastructure improvements or operational improvements.

In the 2017 contest, nine state DOTs won awards for their programs, including a team from the Virginia Department of Transportation (seen in the photo above) for the agency’s “instant roundabout” concept.

Submissions the 2019 contest are due by May 31 and the winners will be announced at a Capitol Hill ceremony in the fall.

The competition also acknowledges “successful engineering” integrated by transportation agencies into their roadway safety programs and will be included in a “noteworthy practices guide” so they can be replicated nationwide, FHWA added.

[Editor’s note: see below for the Transportation TV story on the National Roadway Safety Awards winner’s ceremony two years ago.]