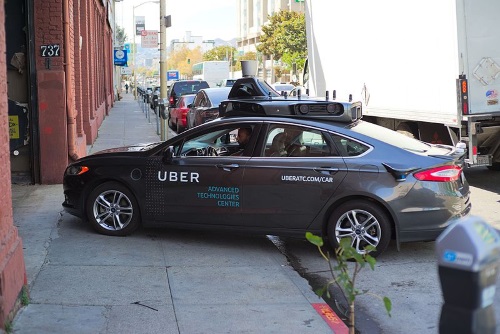 A recent telephone survey conducted by AAA found that 71 percent of those polled are “afraid” to ride in fully self-driving vehicles – a result of what the organization called several “high-profile” autonomous vehicle crashes.

[Above photo by Uber.]

“Automated vehicle technology is evolving on a very public stage and, as a result, it is affecting how consumers feel about it,” noted Greg Brannon, AAA’s director of automotive engineering and industry relations, in a March 14 statement. “Having the opportunity to interact with partially or fully automated vehicle technology will help remove some of the mystery for consumers and open the door for greater acceptance.”

He added that experience seems to play a key role in impacting how drivers feel about automated vehicle technology. For example, many cars on the road today are equipped with advanced driver assistance systems or ADAS, which are considered the “building blocks” for fully self-driving vehicles.

In fact, AAA’s survey revealed that regular interaction with ADAS components such as lane keeping assistance, adaptive cruise control, automatic emergency braking and self-parking functions can “significantly” improves consumer comfort level. On average, drivers who have one of these four ADAS technologies are about 68 percent more likely to trust these features than drivers who don’t have them, the group noted.

AAA’s poll also found that Americans are more “receptive” to using automated vehicle technology in “limited” applications, as 53 percent said they are “comfortable” with low-speed, short distance forms of transportation such as people movers found at airports or theme parks while 44 percent are comfortable with fully self-driving vehicles for delivery of food or packages.

[The Rhode Island Department of Transportation hosted an autonomous vehicle technology demonstration on Feb. 20 to showcase the use of self-driving “shuttle buses” on “low-volume” roads.]

“Despite fears still running high, our study also shows that Americans are willing to take baby steps toward incorporating this type of technology into their lives,” AAA’s Brannon said. “Hands-on exposure in more controlled, low-risk environments coupled with stronger education will play a key role in easing fears about self-driving cars.”

Rural Transit: A Critical Lifeline during the COVID-19 Pandemic