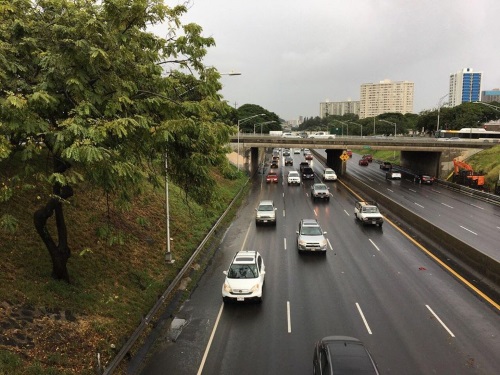 The Hawaii Department of Transportation plans to hold 14 community meetings from late March through early May to gather public feedback on whether to implement a road usage charge or RUC to fund the upkeep of roadways and bridges; replacing the state’s 16-cent-per gallon tax on diesel and gasoline.

[Above photo by Hawaii DOT.]

“The reality is fuel tax revenue, which provides a third of state highways funding, continues to decrease as cars become more fuel efficient,” noted Ed Sniffen, Hawaii DOT’s deputy director for highways, in a statement on March 12. “We need to look at a long-term replacement for the gas tax that is sustainable and fair to all road users.”

He explained that in a RUC system – also called a vehicle miles traveled or VMT fee – vehicle owners pay for actual miles driven versus a fuel tax system where owners pay by the amount of fuel their vehicle consumes. Sniffen added that Hawaii is one of a dozen states – including California and Oregon – that is investigating whether the switch to a pay-per-mile-driven charge is feasible and how it might be implemented.

[Editor’s note: The Federal Highway Administration disbursed $10.5 million worth of funding back on Feb. 12 to seven state DOTs to test “alternative” road and bridge funding mechanisms such as RUC systems.]

Sniffen also noted that Hawaii DOT is looking at an RUC system as a “revenue neutral replacement” to the state’s current fuel tax and will address “important factors” such as “sustainability, fairness, information and privacy protection” as part of its study.